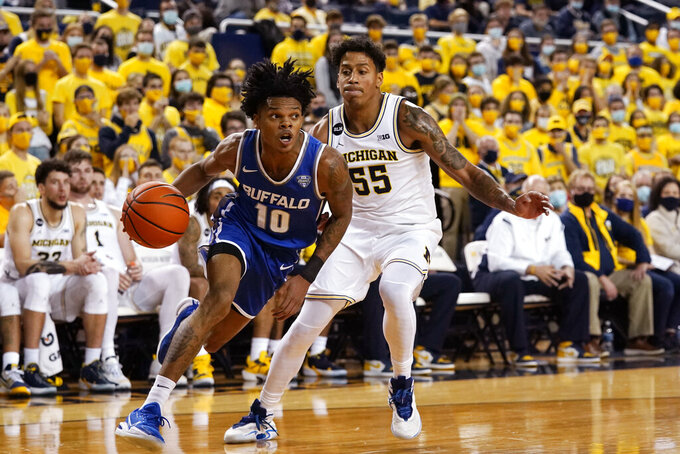 The Wolverines started strong in their season opener, leading by as much as 21 points in the first half and going ahead 51-36 at halftime, before coming out flat in the second half.

The Bulls were much more aggressive and it paid off, allowing them to cut the deficit to five points with five-plus minutes left against coach Juwan Howard's team.

The players, meanwhile, learned a lesson about getting comfortable with a big lead.

“Things like that will help us down the stretch and help us prepare for the adversity that’s coming ahead for us," Dickinson said.

Caleb Houstan helped Michigan pull away, making a 3-pointer to give the Wolverines a 15-point lead with 3:12 left. The highly touted freshman finished with 11 points and six rebounds.

“He’s such a a great shooter and the way our offense is designed, he’s going to have a lot of open shots," Dickinson said. “He’s got a really good opportunity to score a lot for us."

Terrance Williams scored 15 points and Eli Brooks had 11 points and four assists for the Wolverines.

“He has improved dramatically every year for us," coach Jim Whitesell said.

Ronaldo Segu had 15 points and Josh Mballa added 13 for the Bulls.

“They really got after us in the first half,” Whitesell said. “We were lucky to be down 15. I was happy with the way we played in the first 12 minutes of the second half.”

Buffalo: The Bulls are the favorites in the Mid-American Conference with nine seniors on the roster, including preseason all-MAC players Williams and Mballa. They are hoping to reach the NCAA Tournament for the first time with Whitesell, who's in his third season, after making the field four times in a five-year stretch under Nate Oats and Bobby Hurley.

“I think they're going to make some noise in March for sure," Dickinson said.

Michigan: The Wolverines are the preseason pick to repeat as Big Ten champions and are expected to contend for the national title. Howard has a talented and deep roster led by Dickinson, who chose to stay in school after being named the conference’s freshman of the year.

Whitesell said Michigan is a “Final Four-caliber team" that gave his team some lessons to learn.

Michigan senior guard Adrien Nunez, who scored a total of six points last season, had five points with 8:15 left in the first half when the Wolverines were ahead 33-19.

The Wolverines won their first 11 games last year and started 7-0 in Howard’s debut season in 2019.

Michigan has a chance to move up because two teams ranked higher will lose later this week. No. 4 Villanova plays at No. 2 UCLA on Friday and No. 5 Texas faces No. 1 Gonzaga on the road Saturday.

Michigan will face Prairie View A&M in the inaugural Coaches vs. Racism game on Saturday night in Washington.