Edwards leads No. 10 Houston to 79-36 win over East Carolina 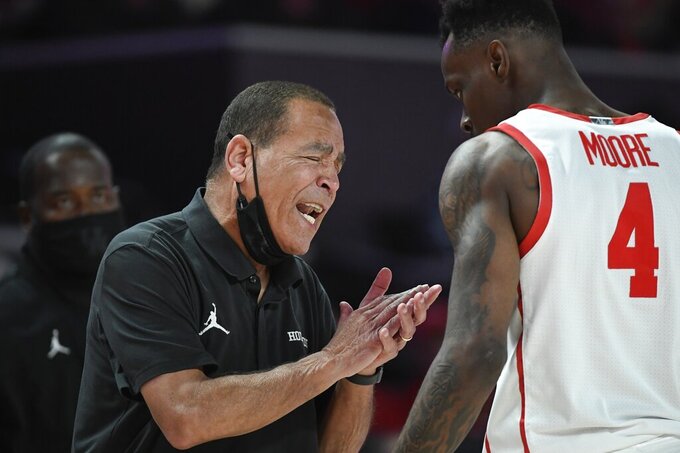 Houston coach Kelvin Sampson speaks to guard Taze Moore (4) on the sideline during the first half of the team's NCAA college basketball game against East Carolina on Saturday, Jan. 22, 2022, in Houston. (AP Photo/Justin Rex)

HOUSTON (AP) — Kyler Edwards had 25 points, eight rebounds and seven assists and No. 10 Houston used a big first half to rout East Carolina, 79-36, on Saturday night.

Edwards scored 17 first half points as the Cougars (17-2, 6-0 American) built a 44-14 halftime lead. Edwards, who finished with six 3-pointers, has scored at least 23 points in each of the last three games and made at least six 3-pointers.

“We’re a ball movement team; we’re not a ball dominant team,” Houston coach Kelvin Sampson said. “A lot of times the ball finds him, and that’s a credit to his teammates. I don’t think we ran any plays for Kyler tonight. The ball just found him.”

Josh Carlton added 14 points and nine rebounds for Houston, which extended its win streak to nine games and won its 36th straight home game. The Cougars are 6-0 in conference play for the first time since the 1983-84 season.

“Playing hard on defense, rebounding, 50-50 balls that’s what the foundation is,” Sampson said. “We try to take advantage of our guys’ strengths. We try to play to their strength, but I thought tonight first half and second half it was probably defensively the best this team has played (since losing Sasser).”

Tristen Newton finished with 14 points and six rebounds for the Pirates.

“It was absolute domination from start to end by Houston,” East Carolina coach Joe Dooley said. “They controlled every aspect of the game. We didn’t respond, which was very disappointing, and I thought they absolutely dominated every component of the game.”

“I think Houston’s defense had us backed up on our heels. We dribbled in place. We didn’t get downhill, and it was hard to get around them. That’s great defense. I thought they had a great plan, and they pressured us out of everything.”

Houston jumped out a to a 32-4 lead on two free throws by Edwards with 6:49 remaining in the first half. Edwards had 14 points in the game-opening run.

East Carolina: The 36 points was a season low and tied for the second fewest points scored in school history. … The Pirates finished 19 of 28 from the free throw line.

Houston: The Cougars improved to 10-0 against East Carolina in Houston and have won 10 of the last 11 meetings between the schools. … Houston had nine blocks, eight steals and 20 assists as a team.