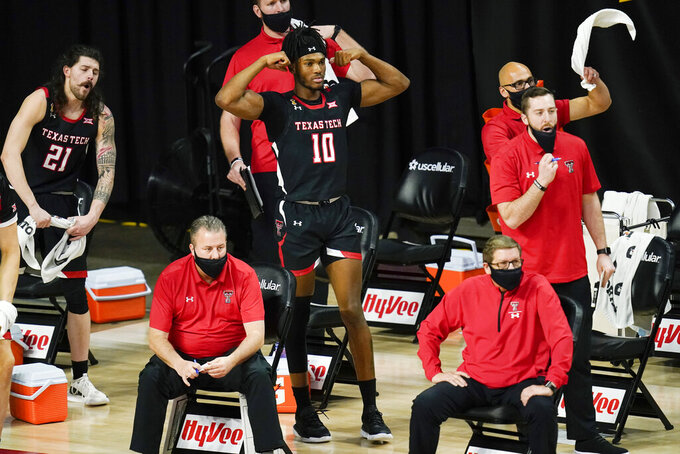 Texas Tech forward Tyreek Smith (10) reacts on the bench during the first half of an NCAA college basketball game against Iowa State, Saturday, Jan. 9, 2021, in Ames, Iowa. (AP Photo/Charlie Neibergall)

Edwards' layup and free throws put the Red Raiders up 36-20. Terrence Shannon Jr. capped another 12-0 run with a layup for a 26-point lead late in the half.

Before dominating the Cyclones, Texas Tech's previous two Big 12 wins came by a combined 11 points. For the first time ever, five of Iowa State's first nine opponents have been ranked, including four foes in the Top 10.

Texas Tech plays at No. 4 Texas on Wednesday. The Longhorns' lone loss came Dec. 6 against Villanova. The Red Raiders have not beaten a ranked team this season.

The schedule doesn't get any easier for Iowa State. The Cyclones travel to Kansas State on Wednesday after losing to the Wildcats 74-65 earlier this season, and visit No. 6 Kansas on Saturday.