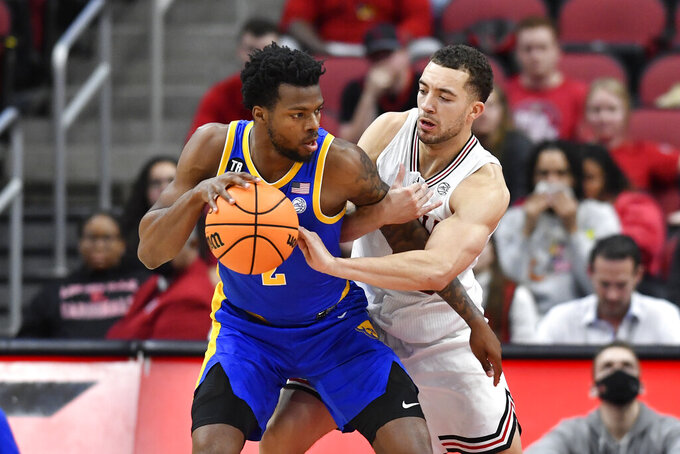 Louisville guard Jarrod West (13) attempts to get the ball away from Pittsburgh guard Femi Odukale (2) during the second half of an NCAA college basketball game in Louisville, Ky., Wednesday, Jan. 5, 2022. Louisville won 75-72. (AP Photo/Timothy D. Easley)

LOUISVILLE, Ky. (AP) — El Ellis scored 18 points off the bench, including seven consecutive for Louisville during a critical late stretch to put the Cardinals ahead for good before holding off Pittsburgh 75-72 on Wednesday night.

A thrilling second half featuring 16 lead changes finally swung the Cardinals' way thanks to Ellis, who scored 14 points after halftime including a go-ahead 3-pointer with 5:11 remaining for a 63-61 lead. The junior guard added another go-ahead jumper and two free throws to make it 67-63 before Sydney Curry added a layup and Noah Locke (13 points) a 3 for a 72-65 cushion that Louisville needed.

Jamarius Burton scored seven consecutive points — including two free throws after a technical foul on Louisville coach Chris Mack — to get Pitt within 74-72 with seven seconds left. Samuell Willamson’s missed free throw gave Burton a chance to tie in the final second, but his 3-point attempt missed and was grabbed by Ellis to seal Louisville’s third consecutive win.

Ellis made 6 of 10 including 2 of 4 3s for Louisville (10-4, 4-0 Atlantic Coast Conference), which shot 54% in the second half and 48% overall to remain tied atop the league with Miami. Curry finished with eight points and eight rebounds.

Burton scored 21 points, Mouhamadou Gueye added 15 and Ithiel Horton 13 in his return from a 13-game suspension for the Panthers (5-9, 0-3), who played their first game since Dec. 28 after Saturday’s game at Virginia Tech was postponed. Pitt finished 44% from the field.

The teams finished tied on the boards with 34 but Louisville earned a 28-20 edge in the paint and 13-11 on second-chance points.

The Cardinals also made 20 of 30 free throws, scoring the game's first four points from the line following technical fouls on Panthers coach Jeff Capel and the bench during a chippy start featuring double technicals assessed on Louisville's Malik Williams and Pitt’s John Hugley. Williams fouled out with 1:55 left before picking up a second technical with 27 seconds left.