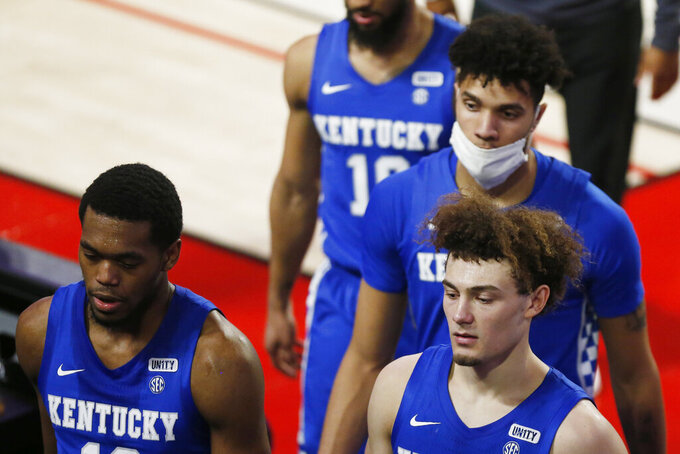 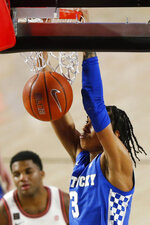 ATHENS, Ga. (AP) — Andrew Garcia scored 16 points, P.J. Horne a made a go-ahead layup with 1.3 seconds left, and Georgia snapped a 14-game losing streak against Kentucky with a 63-62 victory on Wednesday night.

After a timeout with 3.6 seconds left, Horne got past his defender for an inbounds pass in the lane, bobbled it and curled in a layup. A heave by Keion Brooks Jr. did not hit the rim as time expired.

It was Georgia's first win in the series since March 7, 2013 when Kentavious Caldwell-Pope, now with the Los Angeles Lakers, scored 24 points and grabbed 10 rebounds in a 72-62 victory.

K.D. Johnson and Sahvir Wheeler added 10 points points each for Georgia (9-4, 2-4 Southeastern Conference). Horne finished with eight points, and his game winner gave the Bulldogs their first lead since 49-47, coming with about 10 minutes left. Wheeler had seven of the Bulldogs' 12 assists.

Georgia, which has one of the nation’s most balanced offensives with seven players averaging 9.5 points, had seven players score at least six against Kentucky.

The Wildcats entered averaging 15.2 turnovers and committed 17 while shooting just 1 of 13 from long range against the Bulldogs. Their 14-game winning streak against Georgia in SEC play was second to its 15-game win streak against Mississippi State.