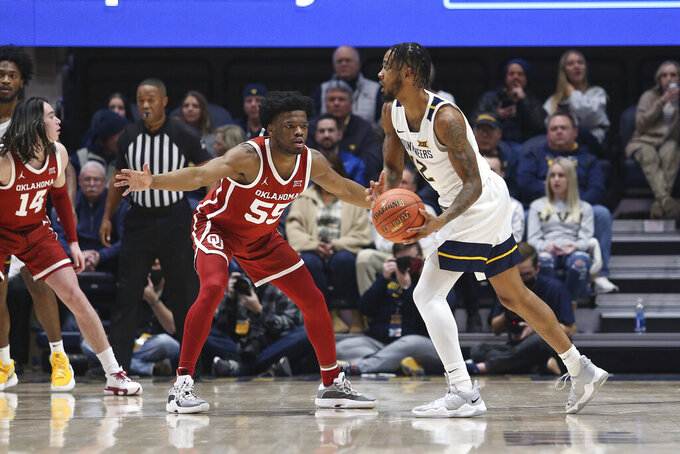 It was Jacob Groves’ first start and highest scoring game with Oklahoma, which started a pair of brothers for the first time since Blake and Taylor Griffin’s March 2009 start in the Elite Eight.

Tanner Groves was 9 of 11 from the floor and Jacob Groves made 4 of 6 field goals. Umoja Gibson also had 12 points for the Sooners.

Gabe Osabuohien played just 19 minutes but led West Virginia with 17 points. Jalen Bridges added all 12 of his points in the second half. Taz Sherman scored nine of his 11 points in the first.

Oklahoma took the lead for good with 12:10 remaining in the first half and built a 30-22 halftime advantage. Gibson made consecutive 3-pointers to give Oklahoma a 54-40 with about 10 minutes left. The Sooners stretched it to 63-46 with 6:28 remaining.

West Virginia pulled to 68-62 with 59 seconds to play but didn't get closer. The Sooners made 18 consecutive free throws and finished 21 of 22 from the line.

It was West Virginia coach Bob Huggins’ 500th game with the Mountaineers and he surpassed 1,300 in his career.

Oklahoma plays at top-ranked Auburn on Saturday. West Virginia is on the road on Saturday against Arkansas, which has won five straight.