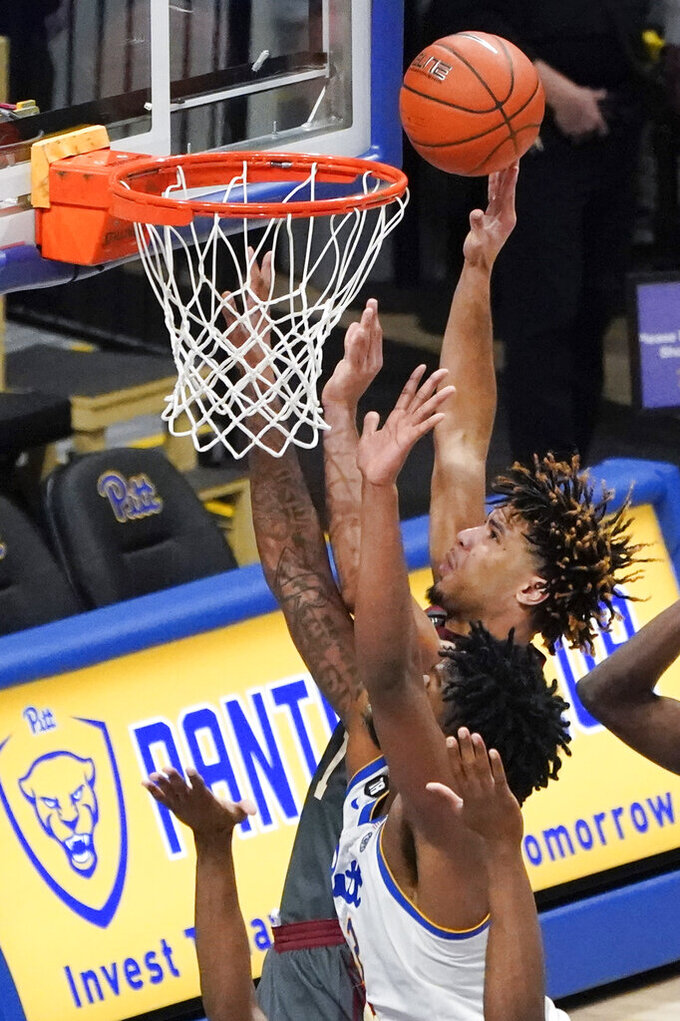 Boston College's T.J. Bickerstaff, top, is fouled by Pittsburgh's John Hugley while shooting during the second half of an NCAA college basketball game, Saturday, Jan. 8, 2022, in Pittsburgh. (AP Photo/Keith Srakocic) 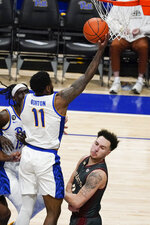 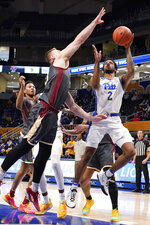 PITTSBURGH (AP) — John Hugley scored 32 points and snared 13 rebounds and Pittsburgh got its first Atlantic Coast Conference win of the season, holding off Boston College to earn a 69-67 victory Saturday.

Boston College now has lost its last 15 games away from home and has not won a road game in more than a year.

Makai Ashton-Langford hit a 3-pointer with 11:15 left in the first half to put Boston College in the lead, 15-13, and sparked a 12-0 run, adding a pair of free throws and a layup. Hugley brought the Panthers right back by scoring three straight layups and adding two free throws to cut the deficit to 24-21.

Femi Odukale dunked with 12:39 left in the game to put Pitt in front, 46-44, and Hugley dunked to give the Panthers an eight-point lead, but BC battled back to tie the game at 56-56 with 5:47. Hugley hit two free throws and a layup to take a four-point lead with more than four minutes left, but Ashton-Langford's 3 with 1:39 left tied the game at 64-64. After two free throws from both Hugley and Jamarius Burton, the Eagles got a three-point play from T.J. Bickerstaff to get within one, 68-67 with :13 left, but a runner by Ashton-Langford at the buzzer rolled off.

Hugley scored 19 points in the first half and converted 15 of 20 from the line for Pitt (6-9, 1-3), which collectively shot 23 of 28 from the line. Burton finished with 14 points, five rebounds and three assists and Odukale added 11 points and four assists.

Ashton-Langford finished with 23 points, hitting 5 of 7 from the line to lead Boston College (6-7, 1-2). Jaeden Zackery added 12 points and Brevin Galloway chipped in 11 off the bench. The Eagles shot 14 of 19 from the line.