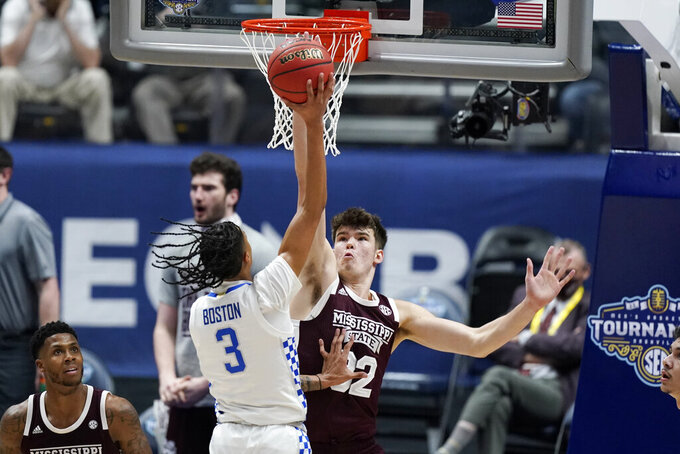 LEXINGTON, Ky. (AP) — Kentucky guard Brandon Boston Jr. has decided to enter the NBA draft after one season with the Wildcats.

Boston said Saturday in a release that he was disappointed in the Wildcats’ results this season, their first losing campaign since 1988-89. The Norcross, Georgia, native thanked Kentucky fans, coaches and teammates for pushing him to become the best player he could be.

“I’m excited for this opportunity,” said Boston, who averaged 11.5 points and 4.5 rebounds per game. “And I know that I will have the foundation to handle anything that comes my way because of my time as a Wildcat.”

Coach John Calipari acknowledged that the 6-foot-3 guard’s lone season was challenging, but said he improved as it went on and “has only scratched the surface of who he is going to become as a player.”

Boston follows teammates Isaiah Jackson and Terrence Clarke into the NBA draft this week. Jackson, the Wildcats’ top shot blocker this season, will go through the evaluation process but not hire an agent, leaving open the possibility of returning to school.