Kentucky's Jackson to enter NBA draft, but not hire an agent 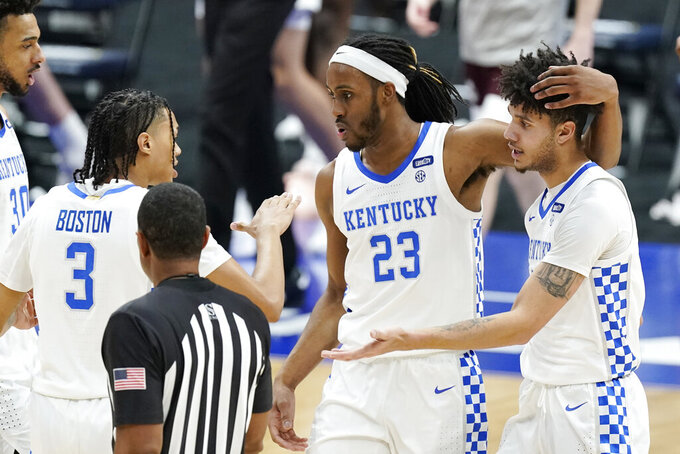 Kentucky's Brandon Boston Jr. (3), Isaiah Jackson (23) and Dontaie Allen, right, celebrate after a score against Mississippi State in the second half of an NCAA college basketball game in the Southeastern Conference Tournament Thursday, March 11, 2021, in Nashville, Tenn. (AP Photo/Mark Humphrey)

LEXINGTON, Ky. (AP) — Kentucky forward Isaiah Jackson says he will enter the NBA draft and be evaluated but not hire an agent, leaving the door open to return to school.

The 6-foot-10 freshman averaged 8.4 points and 6.6 rebounds per game and blocked 65 shots this season to help the Wildcats rank third nationally through Sunday. Jackson rejected eight shots against then-No. 7 Kansas in his third outing, the most ever for a Kentucky player against an Associated Press Top 10 opponent. It was also the most since Willie Cauley-Stein blocked nine against Boise State on Dec. 10, 2013.

Jackson said in a release Wednesday night that playing in the NBA was a dream that he would pursue with the right opportunity. He stated that he wanted to test the waters and added, “I am looking forward to the process and seeing what my future holds.”

He is Kentucky’s first player to announce plans to enter the draft, but there currently is no deadline for a final decision. Dates for the draft, combine and NCAA eligibility deadline have not been set due to NBA and NCAA schedules restructured because of the COVID-19 pandemic.