Laszewski, Irish hold on for first win at Kentucky, 64-63 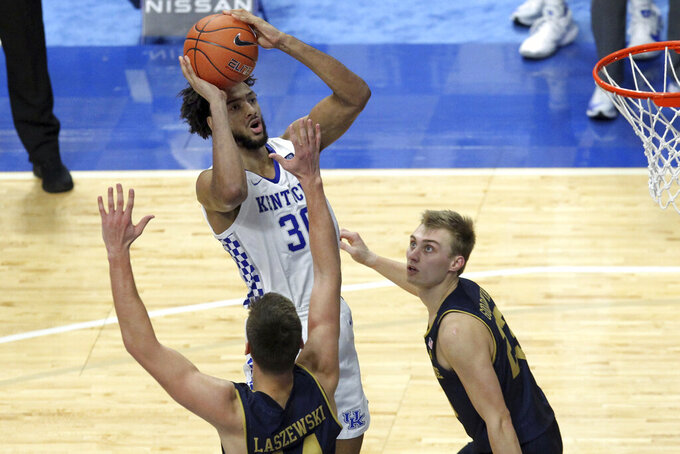 Nate Laszewski scored 21 points as Notre Dame put Kentucky into a historic first-half deficit, and the Irish held on for their first-ever victory in Lexington, beating the Wildcats 64-63.

“We talked about growing up and getting one of these,” Notre Dame coach Mike Brey said. “And we knew as good as we were in the first half offensively, that there was going to be a run coming. And for us to hold the run off and play enough defensive to escape, I’m really proud of our group, and I think it’s something we can build on.”

Notre Dame used a 19-0 run in the first half to open a 33-9 lead and were up 48-26 at the half. It was the largest halftime deficit in a home game in Kentucky’s history.

“That may have been one of the most beautiful 20 minutes offensively that I have ever witnessed,” Brey said. “And for me to say that, with the offensive lineups that I’ve had through the years, was unbelievable.”

The Wildcats got back in it with a 16-0 run and trailed by one when Isaiah Jackson’s block of a Laszewski’s 3-pointer led to a shot-clock violation with 12 seconds left. Olivier Sarr missed an open 15-footer from the right wing with a second left and Devin Askew was too late flying in from the left for a putback.

“We fumbled the ball,” Kentucky coach John Calipari said. “If we didn’t fumble the ball, we would have had the weak side rebound tip-in. So, we had a guy over there for a reason. It was either, you take it, you quickly get it to him, he’s going to shoot it, one of you two shoot, we’ll have weak side rebound.”

Prentis Hubb added 18 points for Notre Dame (2-3), which gave up an eight-point halftime on lead on Tuesday in losing to No. 22 Ohio State by five points. The Irish also lost their season opener to No. 13 Michigan State by 10.

“We were really happy that we managed to finish it out. (Kentucky) threw everything at us that they had, they are a really great team, Laszewski said. “But just being able to stay strong, stay together was really exciting for us.”

After Ryan’s three-point play had the Irish on top 53-33, the Wildcats’ pressure picked up. Davion Mintz made the first of two layups, Boston and Askew contributed 3-pointers, and Sarr scored six points, his jumper pulling Kentucky within 53-49 with 7:34 remaining.

“We picked up and pressed and we became the aggressor,” Calipari said. “That’s what happened. Do we have to play the whole game? Yeah, let’s get in great shape and let’s do it. We’re not taking chances. But we’re picking up and making them play. Getting into their legs a little bit. Maybe that’s who we are.”

Hubb scored seven points and Juwan Durham had a 3 as the Irish regained control to lead 62-53 with 2:15 to play but in 45 seconds, Clarke pulled Kentucky within one. Hubb and Sarr exchanged baskets, setting up the final sequence.

Sarr had 14 points in the second half while the Irish shot 28%, making just 1 of 10 from 3-point range and going 1 for 1 from the foul line while committing 12 turnovers.

Notre Dame: The Irish have now recorded wins over North Carolina, Duke and Kentucky during the past five years, all on the road. Notre Dame will open Atlantic Coast Conference play against No. 10 Duke Wednesday at home. The Irish play two of their next three games on the road.

Kentucky: The Wildcats have lost back-to-back at home for the first time in Calipari’s tenure as coach of the Wildcats. Kentucky faces a long climb back to .500 and will take on UCLA in the CBS Sports Classic Saturday in Cleveland, gollowed by a road contest at No. 25 Louisville on Dec. 26.