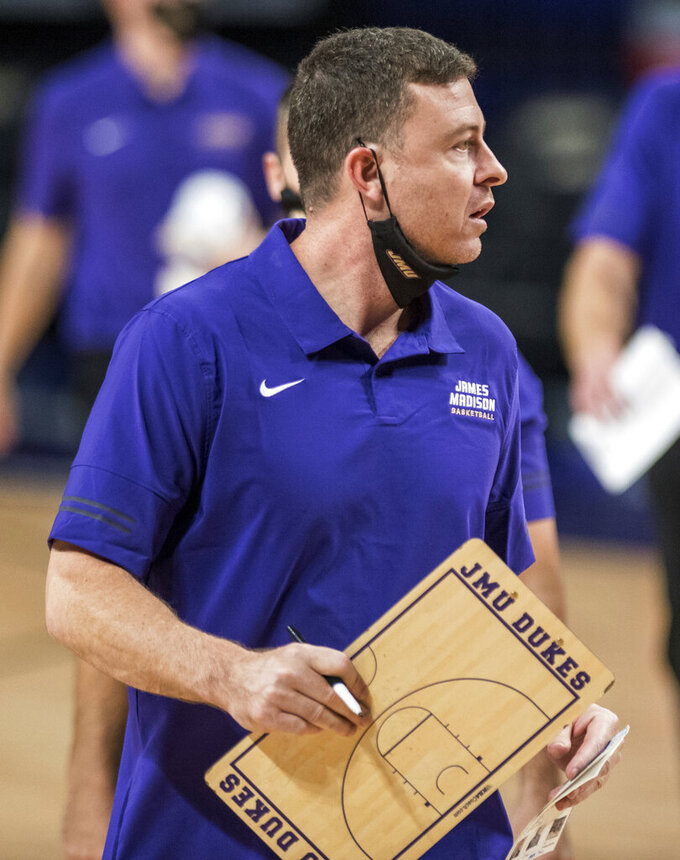 James Madison head coach Mark Byington talks with his team as they walk off the court at the end of the first half of an NCAA college basketball game against Radford in Harrisonburg, Va., Sunday, Nov. 29, 2020. (Daniel Lin/Daily News-Record via AP)

North Carolina State says Saturday’s men’s basketball game against Connecticut has been canceled due to a positive COVID-19 test for a member of the team’s traveling party.

The school announced the cancellation early Saturday. The matchup was scheduled to be the final game in “Bubbleville,” a series of college basketball games at the Mohegan Sun Arena in Uncasville, Connecticut.

N.C. State says all program members had a test come back negative before traveling to Connecticut. They then received another round of testing after arriving and received negative results before Thursday’s win against Massachusetts-Lowell.

But, the positive result came in Friday’s round of testing 24 hours ahead of the game in accordance with NCAA protocols.

James Madison has paused all men's basketball activities following a positive COVID-19 test within the program.

The school got the positive test result on Friday. A second test was conducted and also came back positive.

In accordance with contact tracing guidelines, Saturday’s game against Maryland will not be played as scheduled. James Madison's games with Old Dominion on Monday and Coppin State on Thursday are pending further testing and consultation.

The Atlantic Coast Conference says it has postponed the men’s basketball game between No. 15 Virginia and Wake Forest set for Dec. 16.

The announcement comes amid positive COVID-19 tests, contact tracing and quarantines within the Wake Forest program. The Demon Deacons announced earlier this week they were pausing team activities due to coronavirus issues.

Wake Forest postponed Wednesday’s game against Troy and lists its Dec. 13 game against Presbyterian as canceled.

UTEP is moving a football game against North Texas to the home of the Mean Green in yet another change for the Miners, who had three consecutive games canceled for COVID-19 reasons.

The game is now scheduled for next Friday in Denton, a day earlier than the previously scheduled game in El Paso. The far West Texas city has been hit hard by the coronavirus in recent weeks.

UTEP and North Texas were originally supposed to play on Oct. 31 in El Paso. The Miners haven’t played since a 52-21 loss at UTSA on Nov. 14. Next Friday’s game is the last on the schedule for both teams. UTEP hasn’t indicated any plans to make up games that were called off against UAB, Rice and Southern Miss.

Milwaukee has rescheduled the first two games of its men’s basketball season.

School officials announced their game at Kansas State that had been scheduled for Tuesday will now take place Dec. 11 to allow for proper COVID-19 re-entry protocols. Milwaukee’s game at Western Michigan has been pushed back from Dec. 12 to Dec. 13.

The Nov. 21 decision resulted in the cancellation of the MKE Classic, which was supposed to serve as Milwaukee’s season-opening event. The MKE Classic was a three-team event featuring Milwaukee, North Dakota State and Southern Mississippi that would have run from Nov. 27-29.

Louisville has canceled its men's basketball game Friday against UNC Greensboro and paused team activities indefinitely following a positive COVID-19 test within the program and subsequent quarantining and contract tracing.

The preceding game scheduled between Duquesne and Winthrop at the Cardinals’ KFC Yum! Center home arena also has been canceled because of coronavirus-related issues, a release stated Thursday night.

The release added that no determination has been made on Louisville’s game Wednesday night at No. 4 Wisconsin in the ACC/Big Ten Challenge or its Dec. 16 Atlantic Coast Conference opener against North Carolina State.

“We are adhering to the ACC and university protocols, and will monitor the matter day-to-day,” athletic director Vince Tyra said.

One member of the Syracuse men’s basketball team has tested positive for COVID-19.

The school said in a release the positive result stemmed from testing that occurred last week. Consistent with local health department guidelines, that individual and the team are taking all necessary precautions.

Because of the new positive test, other players, including junior guard Buddy Boeheim, were unable to play against Niagara on Thursday night because of contact tracing.

The American Athletic Conference has announced that Saturday's football game between Houston and SMU will not be played because of concerns about the novel coronavirus.

SMU athletic director Rick Hart says the school has identified a positive case of COVID-19 involving a staff member, and a number of football players were identified as close contacts by contact tracing. Hart says large portions of multiple position groups, including an entire unit, are affected and in quarantine.

The game was originally to be played Saturday, Nov. 21 and had been rescheduled to this Saturday.

The school says Wells was isolating at home and handling his duties remotely. If the positive test is confirmed, defensive coordinator Keith Patterson will serve as head coach against the Jayhawks.

The Red Raiders close out a fifth straight losing season against winless Kansas. Wells is in his second year.

The Jayhawks’ only Big 12 win in two seasons under coach Les Miles came against Texas Tech last year. Kansas has a 12-game losing streak since that victory.

USA Curling has decided to cancel or postpone all remaining events this season until at least May, meaning the reigning national champions in men’s, women’s and mixed doubles will represent the United States at the 2021 world championships.

The national governing body said Thursday that it hopes to hold the national championships in all three disciplines in a bubble in May. But because that will be after the world championships, the 2020 winners would get the U.S. berths -- if the tournaments are held.

The teams did not get a chance to compete at the 2020 worlds, which were canceled due to COVID-19.

The U.S. senior national championships have been canceled. The club championships and under-18 and -21 competitions are still planned for an undetermined date.

The U.S. long track national speedskating championships scheduled for this weekend in Utah have been called off.

U.S. Speedskating executive director Ted Morris said Thursday the meet at the Utah Olympic Oval in Kearns will be rescheduled. The postponement is in response to results from COVID-19 testing and contact tracing.

The meet was to serve as the selection process for a potential World Cup team in case a World Cup series hosted by the International Skating Union is held in January.

The University at Albany men’s and women’s basketball programs are on a temporary pause from team activities due to presumptive positive tests among individuals associated with both programs’ Tier 1 group.

Further testing and contact tracing are being conducted to determine the length of the pause and whether any additional measures are necessary.

A positive COVID-19 test has caused Boston University's men’s hockey team to pause all athletic activities and the school has canceled Saturday’s game at Connecticut.

According a statement from the school, the positive test was from a member of the team’s Tier 1 personnel, which includes coaches, athletes, and support staff. Tier 1 personnel are tested three times a week in accordance with NCAA, Hockey East, and university protocols.