The Latest: No. 21 Oregon men resume basketball after pause 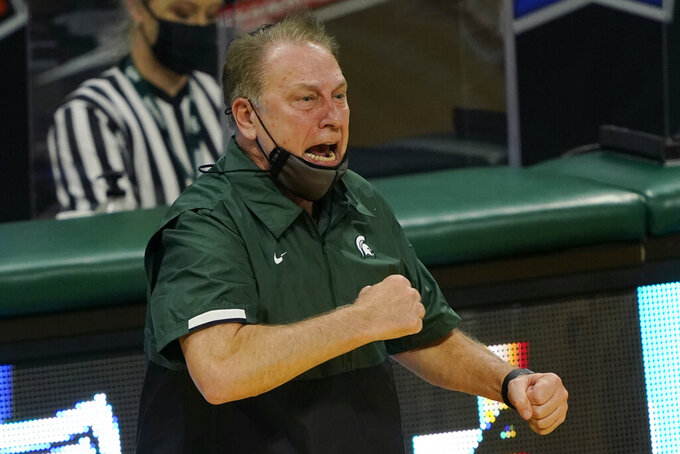 The No. 21 Oregon Ducks have been cleared to resume playing basketball after a weeklong pause because of COVID-19 protocols.

Three games were postposed during the pause. A game at home against UCLA originally set for last Tuesday was rescheduled to Feb. 1 in Los Angeles.

Home games last week against Arizona State and Arizona have not yet been rescheduled.

The Ducks (9-2, 4-1 Pac-12) returned to practice on Monday and are set to host Oregon State on Saturday.

The Canadian women’s hockey team opened a 35-player camp in a Calgary bubble.

The 14-day camp is the first physical gathering of national-team players in months because of the COVID-19 pandemic.

Hockey Canada invited 47 players to Calgary, but 12 won’t participate because of school commitments and “other reasons,” the organization said Monday in a statement.

The 2020 women’s world hockey championship in Halifax and Truro, Nova Scotia, was postponed to April 7-17, 2021 because of the pandemic.

National team players have skated and trained this winter in Toronto, Montreal and Calgary hubs.

Hockey Canada received clearance from the Alberta government to hold the camp, which is closed to the public.

Twenty-two players named to the 2020 world roster were invited to camp, as well as 18 veterans of the squad that won an Olympic silver medal in Pyeongchang, South Korea, in 2018.

Vanderbilt’s women’s basketball program has decided to stop playing with the Commodores struggling with a depleted roster.

The Commodores currently are 4-4, 0-3 inside the Southeastern Conference. The start of their season featured three cancellations, and they’ve played two games since having a game canceled and two others inside the SEC postponed. They were shut out in the second quarter of a 106-43 loss last week to South Carolina and lost 80-73 on Sunday to No. 12 Kentucky.

Vanderbilt’s roster has been thinned by COVID-19 issues, opt-outs, injuries, a player with myocarditis and another recovering from an ACL injury.

The Commodores join a growing list of women's basketball teams that have decided to stop playing that now includes Duke, SMU, Virginia and San Jose State among others.

Michigan State is postponing its game this weekend against No. 22 Illinois, moving a third straight basketball game due to a COVID-19 outbreak within coach Tom Izzo’s program.

Izzo made the announcement Monday, a day after one additional player and two non-coaching staff members tested positive for the coronavirus. Last week, three players tested positive and that led to the Spartans postponing games at No. 4 Iowa and against Indiana.

Michigan State was scheduled to host the Fighting Illini on Saturday.

Izzo, who tested positive for the coronavirus two months ago, says he is doing individual workouts with eight to t10 players on the team who are not in isolation.

Cape Verde has become the third team to withdraw from the men’s world handball championships because of coronavirus cases.

The International Handball Federation says the African island nation was unable to field the minimum number of 10 players. Cape Verde already forfeited a preliminary round game to Germany on Sunday and will now be classified 32nd and last in the competition.

The IHF said Saturday that two of Cape Verde’s 11 players had tested positive.

The United States and the Czech Republic withdrew because of coronavirus cases in their squads before the tournament began and were replaced by other teams.

The race director of the men’s World Cup will miss the biggest race in skiing after testing positive for COVID-19.

The International Ski Federation says Markus Waldner is self-isolating ahead of the Hahnenkamm races this weekend in Kitzbühel, Austria.