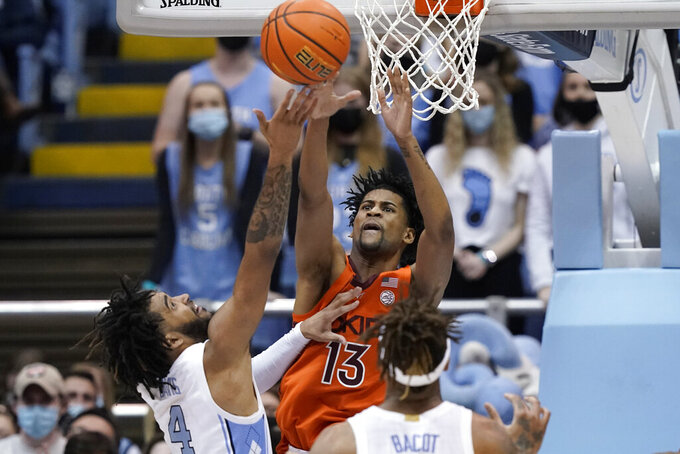 The Tar Heels bounced back at home after two blowout losses on the road. They lost to Miami 85-57 and to Wake Forest 98-76 last week.

Keve Aluma made a pair of free throws to draw Virginia Tech within 57-54 with 5:36 remaining in the second half but Manek had a dunk and a 3-pointer and Love made 3 of 4 free throws as the Tar Heels extended their lead to 11 points.

Love's jumper with 1:43 remaining was the Tar Heels' last field goal and they finished off the win with 7 free throws in 8 attempts down the stretch.

The Tar Heels were able to increase their 4-point halftime lead despite shooting 33% in the second half. Six of their 10 second-half field goals were 3-pointers.

North Carolina played without Dawson Garcia who had returned home to Minnesota due to an illness in his family. He averages 9.0 points and 5.5 rebounds per game.

The game was rescheduled from Dec. 29, forcing both teams to play three games in five days. Miami visits Virginia Tech on Wednesday and North Carolina will be at home against Boston College.