LSU moves up to No. 2 in NET rankings with undefeated start 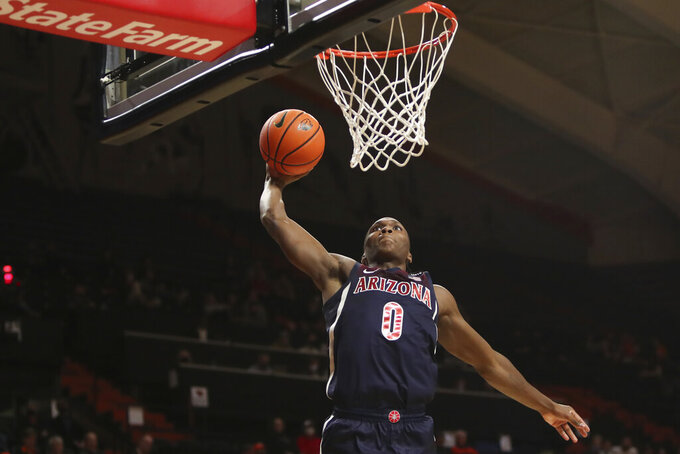 The NCAA's first NET rankings are out and the top spot mirrors the AP Top 25 with Purdue at No. 1.

The NCAA's college basketball primary sorting tool takes a bit of a deviation at No. 2.

LSU, which entered the AP poll at No. 25 this week, is No. 2 in the NET rankings released on Monday, based in large part to the Tigers' 8-0 start. Five of the top seven teams in the NET rankings are undefeated: Purdue, LSU, No. 3 Arizona, No. 6 Baylor and No. 7 Southern California.

LSU has yet to play a road game, opening with six wins at home and two on neutral courts. The Tigers' list of wins includes Wake Forest and Penn State, and a 15-point win over Ohio in their last game.

LSU returns from a 10-day break to play at Georgia Tech on Saturday, time off coach Will Wade says the Tigers needed despite their undefeated start.

“We’ve had some slippage in some areas,” Wade said. “It hasn’t been noticeable because we’ve been winning and all that sort of stuff. I needed to get to this break to reset everything.

Purdue was the unanimous choice at No. 1 in Monday's AP Top 25, ending a streak of 379 weeks of appearing in the poll without being ranked No. 1, second all-time to Maryland's 434 weeks.

The Boilermakers (8-0) have been dominant so far, winning by an average of 25.6 points, their closest game a seven-point win over Iowa last week. Purdue plays its first game at No. 1 at Rutgers on Thursday, then faces North Carolina State on Sunday in the Hall of Fame Invitational in Brooklyn, New York.

“They deserved to be No. 1,” Iowa coach Fran McCaffery said after the loss to Purdue. “They can hurt in so many ways. They have depth, experience and size. It’s going to be a hard team to beat.”

The longtime assistant to Mark Few at Gonzaga brought a solid resume to the desert and the Wildcats had a core of returning players, but were picked to finish tied for fourth in the Pac-12 preseason poll.

Arizona (7-0) has been better than projected so far, playing with a similar free-flowing style Lloyd helped create at Gonzaga while picking up wins over Wichita State and then-No. 4 Michigan.

The Wildcats face a couple of big tests this week, hosting Wyoming (No. 12 in the NET) on Wednesday and playing at Illinois on Saturday.

Baylor and No. 6 Villanova will face off in another of what's been a series of early-season showdowns on Sunday, when the Wildcats head down to Waco to play the Bears.

Baylor has not shown any signs of letdown after last season's national championship, rolling through its first eight opponents, including three straight to win the Battle 4 Atlantis.

Villanova (6-2) has already lost twice, but those were to No. 5 UCLA and top-ranked Purdue.

“That is a great Villanova basketball team,” said St. Joe’s coach Billy Lange said after an 81-52 loss to Jay Wright's Wildcats. “I believe it is the best team he’s had in 20 years.”

The rest of the week has some pretty big matchups, too.

The first one comes Thursday, when No. 7 Texas plays at No. 23 Seton Hall.

The Longhorns (6-1) have bounced back nicely from a lopsided loss at then-No. 1 Gonzaga with four straight double-digit wins, the latest 88-58 over UT Rio Grande Valley on Friday. The Pirates (7-1) shook off a loss to No. 21 Ohio State with four straight wins, three by at least 14 points.

The Buckeyes (6-2) are coming off a massive win, knocking Duke out of the No. 1 spot with a 71-66 last Tuesday. They face another big test against No. 22 Wisconsin on Saturday.

The Badgers (7-1) have been on a roll since losing to Providence on Nov. 15, winning three straight games in Las Vegas to win the relocated Maui Invitational. They beat Marquette by 13 last week and face Indiana on Wednesday.

No. 9 Alabama (7-1) picked up one of its biggest wins in three years under coach Nate Oats its last game, jumping on Gonzaga early before holding on for a 91-82 win in Seattle. The win knocked the Zags down to No. 5 in the AP Top 25 and moved the Crimson Tide up seven spots in Monday's poll.

They get another shot at a marquee win on Saturday, when they host No. 14 Houston. The Cougars (7-1) have backed up last year's Final Four run with a solid start, their only loss coming to Wisconsin in the Maui Invitational semifinals.