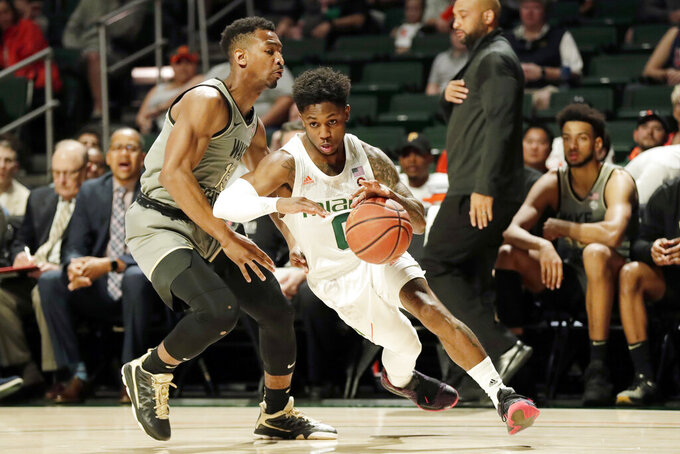 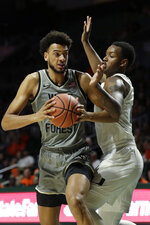 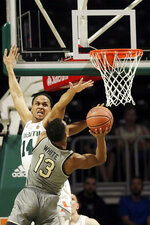 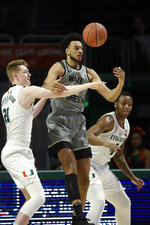 Chris Lykes and Isaiah Wong scored 13 points each to lead the Hurricanes to a 71-54 victory over Wake Forest Saturday afternoon.

Kameron McGusty and Dejan Vasiljevic finished with 11 points each and Rodney Miller grabbed 10 rebounds and had eight points for the Hurricanes, who last enjoyed a winning streak from Dec. 2 to Dec. 31, a stretch that featured four non-conference contests and an ACC game at Clemson.

Both teams struggled offensively; Miami at 40.3% and Wake Forest 38.9%. Miami also made just 13 of 21 free throws but out-rebounded Wake Forest 42-37 and committed only one turnover in the first half when it built the double-digit advantage.

“We’ve been able to score the ball pretty well most nights,” Miami coach Jim Larranaga said. “But tonight it was a very good defensive effort.”

Forward Sam Waardenburg’s return from a neck injury that forced him to miss the Hurricanes’ win over Boston College Wednesday night allowed Larranaga to use a nine-player rotation in the first half since Jan. 4. None of Miami’s players reached 30 minutes Saturday.

“That allows the player to play really hard and play really well,” Larranaga said of the expanded rotation. “When everybody is sharing that responsibility, it makes a huge difference. But it’s all about the preparation.”

The Demon Deacons (11-14, 4-11) rallied from a 17-point deficit in the second half and got to within 47-39 on Torry Johnson’s fast-break dunk with 9:11 remaining that ended a string of nine unanswered. Miami regained its double-digit advantage on McGusty’s 3-pointer.

Waardenburg’s layup with 1:20 remaining gave the Hurricanes their largest lead at 64-44.

“Miami came out and defensively took us out of what we wanted to do,” Wake Forest coach Danny Manning said. “We had some shots that we normally make that we missed and we didn’t do a good job of rebounding the baskeball.”

Waardenburg felt he had recovered sufficiently from the whip-lash type injury he sustained in practice Tuesday to play against Boston College. But Larranaga opted to sit his junior forward, allowing him additional time to heal and return for Wake Forest.

“We had Chris (Lykes), who had a groin injury and he played at Duke and kind of aggravated a bit, so I think coach was concerned about that,” said, Waardenburg, who scored nine points and had seven rebounds in 25 minutes Saturday. “Now, sitting out and getting treatment it’s much better.”

The Demon Deacons lead the ACC in attempted and made free throws. But Childress, Johnson and Olivier Sarr were the only Wake Forest players who shot free throws against Miami.

Miami: coach Jim Larranaga won his 658th career game, surpassing Ralph Miller for 37th on the all-time list. Larranaga is 188-109 in his nine seasons at Miami.