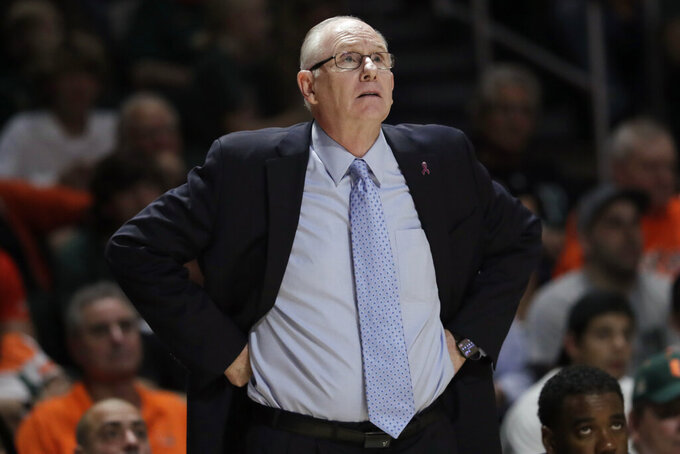 FILE - In this Nov. 5, 2019, file photo, Miami coach Jim Larranaga watches during the second half of the team's NCAA college basketball game against Louisville in Coral Gables, Fla. Larranaga, 70, is heading into his 35th year as a college coach and his 10th at Miami. He's under contract through 2023-24 and says he has no plans to retire, but acknowledges the past two seasons have been trying. (AP Photo/Lynne Sladky, File)

MIAMI (AP) — Coach Jim Larranaga is coming off back-to-back losing seasons for the first time since 1991-93, and he knows why.

His Miami Hurricanes have had trouble guarding their opponents, especially in the Atlantic Coast Conference.

This season the Hurricanes are taller and deeper, and they hope to be better. Five of their top six scorers return from a team that went 15-16 last season, and at least three newcomers are expected to have significant roles.

One of Miami's newcomers is 7-foot senior Nysier Brooks, a transfer who blocked 51 shots for Cincinnati a year ago and is eager to upgrade Miami's interior defense.

"I know a lot more people at this level intend to try me, so I'm going to focus on going vertical," Brooks said. “A lot of people aren’t going through me to finish, but there will be a lot of people that have athletic abilities, so I'm just waiting for them to come see. I'm planning on trying to get defensive player of the year in this conference.”

Regarding perimeter defense, senior guard Chris Lykes says several of his teammates are versatile enough for the Hurricanes to mix and match.

“It will be a different team defensively, and better, too,” Lykes said. “We have solid rim protection. We've also got guys who can guard a number of different positions. We have been picking up full court in practice, and I think we have the speed and agility to do that.”

Larranaga, 71, is heading into his 35th year as a head coach and his 10th at Miami. He's under contract through 2023-24 and says he has no plans to retire, but acknowledged the past two seasons have been trying.

There was more frustration when forward Sam Waardenburg, Miami's leading rebounder a year ago, suffered a season-ending foot injury in practice last month.

“Before," Larranaga said, "when I was speaking to anyone from the media, I would say as long as we stay healthy, we should be in much better shape than we have been the last two seasons. But it a big blow to us to lose Sam.”

Larranaga has coached four NCAA Tournament teams at Miami, but the Hurricanes went 14-18 in 2018-19 — his first losing record since 1997-98 at George Mason. Last season was only slightly better, and the Hurricanes have lost 17 consecutive games to ranked teams since February 2018.

Larranaga blames the Hurricanes' downturn on an FBI investigation into college basketball that raised questions about his program and hurt recruiting. No wrongdoing by Larranaga surfaced.

Recruiting struggles and injuries left the Hurricanes had only eight scholarship players for some games a year ago. This season the rotation could be 10 deep, even after the loss of Waardenburg.

“We can actually get in full practices now,” guard Kameron McGusty said.

Along with Brooks, newcomers include freshman guard Earl Timberlake and freshman forward Matt Cross. Deng Gak, a 6-11 junior, returns after missing most of last season with a knee injury.

The 6-5 Timberlake is among the mostly highly ranked recruits in Miami history.

“He is more physically ready than most freshmen,” Larranaga said. "He's strong and athletic and is going to be a major contributor from day one."

Lykes led Miami with an average of 15.4 points a year ago, and he's the third-leading returning scorer in the ACC. Putting up points isn't his primary goal, however.

“I'm trying to win as many games as I can,” Lykes said. “I feel like I've had a solid career here, but careers are always defined by winning. Unfortunately I haven't won much here.”

The opener against Stetson on Nov. 25 was postponed because of a COVID-19 case within the Hatters' program. Miami is now scheduled to play four non-conference games, beginning Nov. 29 at home against North Florida.

Because of the coronavirus, no fans will be permitted at home games through at least the end of December.