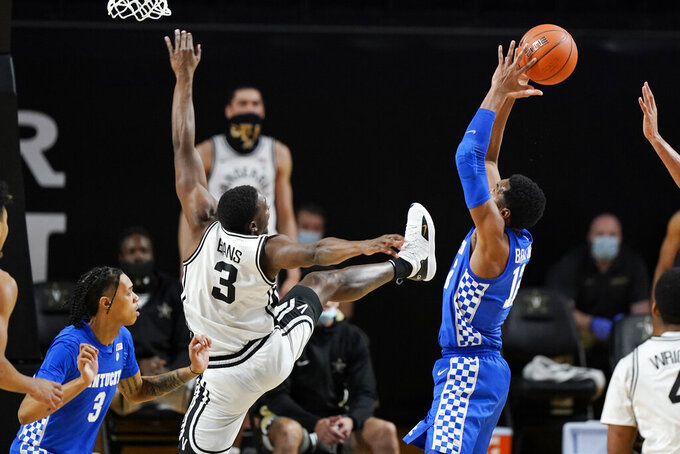 NASHVILLE, Tenn. (AP) — Davion Mintz had 18 points, Jacob Toppin scored 12 of his 16 points in the second half and Kentucky blew a 17-point lead before holding on to beat Vanderbilt 82-78 on Wednesday night.

Scotty Pippen Jr. scored six points and Dylan Disu added five in an 11-5 spurt that pulled Vanderbilt (6-11, 2-9) within a point with 26 seconds left but Toppin, Boston and Devin Askew combined to go 8 of 8 from the free-throw line from there.

Disu had career highs of 29 points and 16 rebounds for the Commodores and Pippen finished with 21 points.

Kentucky scored the first 10 points and never trailed. Boston hit a 3-pointer and then took a steal coast-to-coast for a dunk 17 seconds later to spark a 15-3 run that made it 25-8 midway through the first half.

Issac McBride hit a 3-pointer to trim the Commodores' deficit to 12 at halftime and Vanderbilt scored 16 of the first 20 points of the second half to tie it at 46-all but Mintz answered with a 3-pointer and Kentucky led the rest of the way.

The Wildcats have won back-to-back games for just the second time this season. They won three in a row in early January.