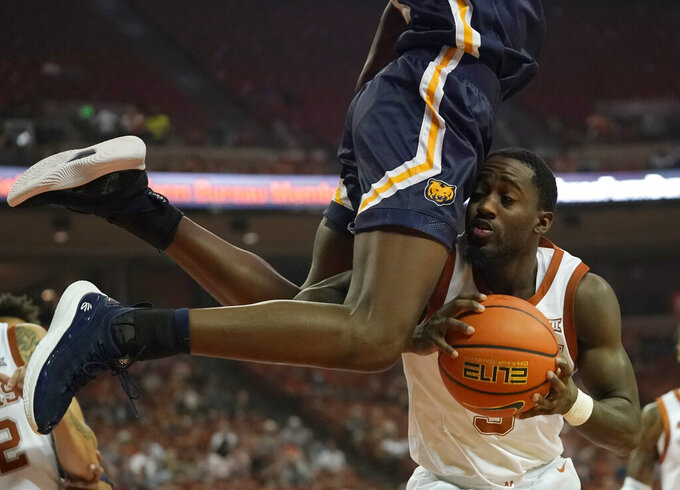 Texas guard Courtney Ramey, right, is fouled by Northern Colorado forward Bryce Kennedy as he tries to scored during the second half of an NCAA college basketball game, Wednesday, Nov. 17, 2021, in Austin, Texas. (AP Photo/Eric Gay) 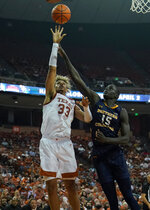 AUSTIN, Texas (AP) — Tre Mitchell has a wealth of talents. He can make jump-hooks near the basket with either hand and move outside for a smooth 3-pointer.

Mitchell put his array of shots on display on Wednesday night, scoring 16 points as No. 8 Texas defeated Northern Colorado 62-49.

Mitchell made 7 of 11 shots in 22 minutes, including a 3-pointer, and scored nine straight for the Longhorns (2-1) in the second half. He also collected seven rebounds.

Coach Chris Beard expects a lot more of that.

Mitchell averaged 18.8 points and 7.2 rebounds last season as a sophomore at Massachusetts and was on the all-Atlantic 10 Conference first team. He was one of seven players who joined Beard, in his first season at Texas, through the NCAA transfer portal.

Mitchell said Beard and his staff are good at creating advantageous situations for him.

“Scouting the other team and seeing where I could get my buckets,” Mitchell said.

Timmy Allen, a senior who transferred to Texas from Utah, added 10 points and eight rebounds.

Texas shot just 41.7 percent, missing 14 of 18 3-pointers. The Longhorns leaned on their defense, Beard's top priority, limiting Northern Colorado to 42 percent shooting. The Bears committed 20 turnovers, including 12 in the first half when they fell behind 37-15.

Northern Colorado outscored Texas 34-25 in the second half, when Bears guard made three 3-pointers.

“Obviously, at the start of the game, in the first half, we were playing some good basketball,” Beard said. “I'm just disappointed in the second half.”

Mitchell started for the first time after working as a reserve in the Longhorns' first two games, a 92-48 victory against Houston Baptist and an 86-74 loss at No. 1 Gonzaga. Beard didn't signal any significance to that move.

“We have no lineup right now,” Beard said. “In my mind, we have seven starters.”

Northern Colorado: Guard Dru Kuxhauzen made 15 3-point baskets in 32 attempts during the Bears' first four games, including eight against Colorado College on Monday. But Texas didn't allow him a shot until 15 minutes into the game. He missed a 3-pointer. Kuxhauzen hit 2 of 6 3s in the game. “Team defense,” Beard said.

The Bears have been extremely busy, and perhaps a bit fatigued. They played three games last week at the Rainbow Classic in Honolulu, beating Pacific and Hawaii and losing to Hawaii-Hilo. They returned home Monday and beat Colorado College 93-53.

Texas: The Longhorns don't have a lot of size. Their two tallest players are Mitchell and Dylan Disu, both 6-foot-9. Disu, who transferred from Vanderbilt after averaging 15 points and a Southeastern Conference-best 9.2 rebounds last season, has yet to play for the Longhorns. He missed the last eight games last season with a knee injury. Texas hopes to have Disu in the lineup soon.

Northern Colorado is at California Baptist on Saturday.

Texas is at home against San Jose State on Saturday.