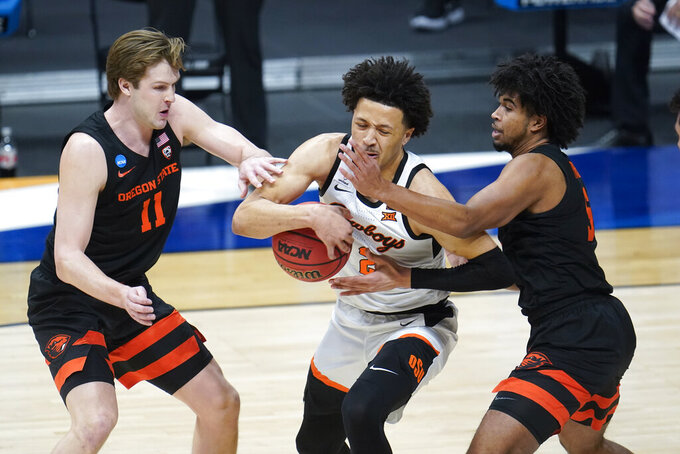 Oklahoma State guard Cade Cunningham (2) drives between Oregon State guard Zach Reichle (11) and Ethan Thompson (5) during the first half of a men's college basketball game in the second round of the NCAA tournament at Hinkle Fieldhouse in Indianapolis, Sunday, March 21, 2021. (AP Photo/Paul Sancya)

INDIANAPOLIS (AP) — Just like that, Cade Cunningham’s college career appears to be over.

The 6-foot-8 freshman point guard scored 24 points in Oklahoma State’s 80-70 loss to Oregon State in the second round of the NCAA Tournament on Sunday night. The first-team AP All-American is expected to be a high pick in the NBA draft — possibly No. 1 overall.

And though he didn't commit either way when asked if it was his last game, Cunningham spoke as though he’s looking beyond college.

“It’s been special,” he said of playing at Oklahoma State. “I think that’s the best way to describe it. I think the biggest thing is I surrounded myself around great people. More than anything, that’s the thing I’m most proud of. That’s the thing, I feel like I’ve grown up the most by being around good people who pushed me to be somebody good on the court and off the court.

Cunningham led the Big 12 in scoring, yet he was a do-it-all performer who often saved his best moments for late-game surges. In his most dynamic performance, he scored 10 of his 40 points in overtime to help the Cowboys win at rival Oklahoma.

Cunningham said Boynton is just getting started. The 39-year-old got his first NCAA Tournament win Friday against Liberty.

“Coach Mike is a big-time coach," Cunningham said. "He’s a big-time people person. He’s somebody you want to be around. I feel like the way that we played this year, I expect a lot of recruits to see that and see coach Mike and say that’s the kind of guy I want to play for, and rightfully so.”