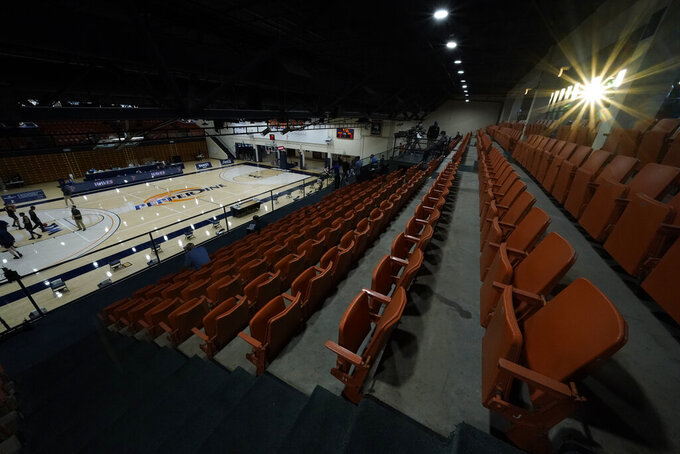 The sun shines through a window over empty seat as Gonzaga basketball players warm up before an NCAA college basketball game against Pepperdine on Saturday, Jan. 30, 2021, in Malibu, Calif. (AP Photo/Ashley Landis) 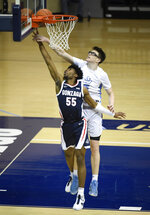 MALIBU, Calif. (AP) — Drew Timme had 19 points and was one of six Gonzaga players to score in double figures as the top-ranked Bulldogs routed Pepperdine 97-75 on Saturday night.

Andrew Nembhard came off the bench and finished with 17 points and eight assists, Corey Kispert scored 16 and Aaron Cook a career-high 15 for Gonzaga (17-0, 8-0 West Coast Conference), which has won 21 straight games dating to last season.

It is the second time this season the Bulldogs have had six or more players score in double figures.

Pepperdine jumped out to a 15-7 lead before Gonzaga took control with a 21-2 run. The outburst included 16 straight points. Timme had six points during the seven-minute span while Anton Watson and Cook added four apiece.

The Bulldogs had a 49-34 lead at halftime, with their largest advantage being 32 points late in the second half.

Gonzaga: The Bulldogs have won their eight conference games by an average of 25.3 points. All of them have been by double digits, with the 14-point win over Saint Mary's being the closest.

Pepperdine: The Waves were looking to continue their momentum after Wednesday’s win over BYU, but couldn't sustain it. They have lost 41 straight to Gonzaga, which is tied for the third-longest losing streak to an opponent in NCAA Division I basketball history.

Gonzaga will extend its streak to 11 consecutive polls as the nation's top-ranked team when the new AP Top 25 is released on Monday afternoon. It will also mark the first time since Kentucky in 2015 that a school has been at the top from preseason to the first week of February.

Gonzaga hosts Loyola Marymount on Thursday. The Bulldogs have a 23-game winning streak against the Lions.