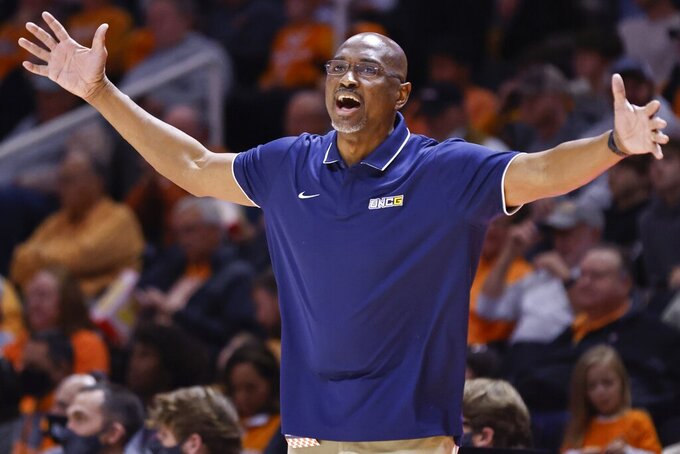 KNOXVILLE, Tenn. (AP) — After his Vols lost to Texas Tech, Tennessee coach Rick Barnes put his team through two very physical practices and that got their attention.

“We spent a lot of time working against a hard, physical defense,” Barnes said. "We practiced against a defense that packed it in — when you know you have to fight when you drive. It got heated. We weren't sure if they were going to come out with the kind of energy we need on defense.”

The Vols did in a big way. They forced 25 turnovers and improved on their miserable shooting effort on Tuesday against the Red Raiders. Josiah-Jordan James and Brandon Huntley-Hatfield each scored 12 points to lead Tennessee.

James made his first start since suffering an injury to a finger on his left hand in the third game of the season.

“Josiah's a big-time shooter,” Barnes said. “He got in the rhythm today. When he gets in the rhythm, he's as good as anyone.”

Santiago Vescovi scored 10 with eight assists and four steals to help the Volunteers flush the memory of the loss.

“We allowed Tennessee to dictate the action,” said UNCG coach Mike Jones. "We were not aggressive. We were not ourselves. We have to be ourselves every time out.

“(Tennessee has) a lot of talented guys. We gave them a lot of free points. It gets frustrating.”

“We need to shoot the 3 on our terms,” said Barnes, whose team depends on long-range accuracy quite a bit for success. “(Against Texas Tech) we pressed some. Today, there were three or four that we pressed on. We have to get that balance.”

Tennessee used a 13-0 run late in the first half to separate itself from the Spartans.

Tennessee super senior John Fulkerson played in his 140th game for the Vols. That ranks second behind Wayne Chism’s 142 from 2006-10. The Vols lead the nation in KenPom’s adjusted defensive efficiency.

UNC Greensboro: It has been four years since the Spartans have beaten a Power 5 conference team. Tennessee was the only one on UNCG’s schedule.

Tennessee: After shooting 27% from the floor in an overtime loss to Texas Tech in New York’s Madison Square Garden, the Vols were desperate to get back in the gym and prove it was a fluke. The next test will come in Nashville next Saturday when Tennessee plays Memphis in Bridgestone Arena. The Vols will have to get used to shooting in the bigger arena.

UNC Greensboro: After Tennessee, the Spartans have four more games before they start Southern Conference play on Jan. 1. They visit Towson on Tuesday.

Tennessee: The Vols will entertain USC Upstate Tuesday before starting a difficult stretch that will include Memphis, Arizona and Alabama to close out December.