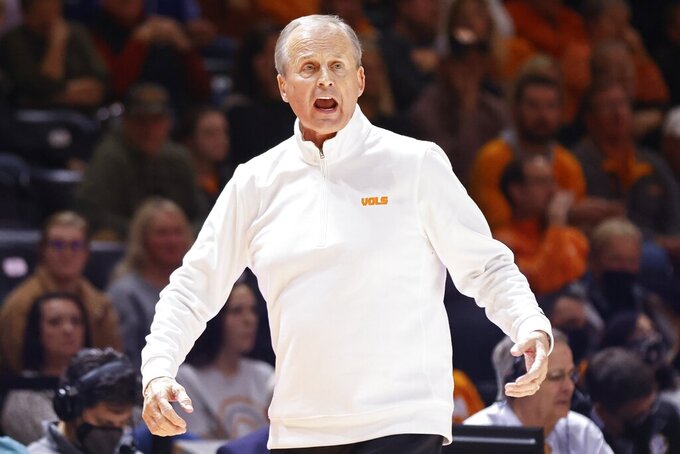 KNOXVILLE, Tenn. (AP) — Kennedy Chandler and Justin Powell scored 15 points apiece to lead No. 13 Tennessee to a 86-44 victory over Presbyterian on Tuesday night.

Chandler, a freshman guard, had seven assists and seven steals. Powell, a transfer from Auburn, came off the bench to hit all five of his 3-point attempts.

“Our guys were locked in,” Tennessee coach Rick Barnes said. “We don't care who we're playing, we're always playing against ourselves.”

Victor Bailey added 14 points and Santiago Vescovi had 13 for the Volunteers (5-1).

Barnes was upset with his team's defense in last week's win over Tennessee Tech, especially from Chandler, considered one of the top point guards in the country.

“Our point guards were getting tagged a lot,” Barnes said. “Kennedy fought hard through some screens. We've seen how electrifying he can be on offense. Why not on defense? He understands he has to play harder than he ever played before. He can get out of his comfort zone.”

Powell, a 6-foot-6 marksman, is adjusting to his role and showing he can provide instant offense. He has been competing for playing time since he joined the Vols.

“My mindset is to always be ready,” Powell said. "Someone's gotta come off the bench. Why not me?

“(Fighting for minutes in practice) is great. I love it. I wasn't promised anything when I came here. I like to fight for my spot.”

Tennessee held Presbyterian scoreless for the final 4:53 of the first half. During that stretch, the Vols scored 17 straight points, leading 45-21 at the break. Tennessee went 9 for 14 (64.3%) on 3-pointers in the first half.

“We were mentally better (than against Tennessee Tech),” Barnes said. “We had a methodical game prep. We came back to play with a purpose.”

Presbyterian: The Blue Hose arrived in Knoxville with their best record since they joined Division I in 2012. They hope playing a power like Tennessee will be beneficial down the road.

Tennessee: The Vols need Josiah-Jordan James to be healthy in time for the meat of their schedule. They have depth, but his versatility is a potent weapon. He missed his third straight game Tuesday with a finger ligament problem on his left hand. Barnes ruled out the possibility of surgery, saying James is “on the mend.”

Presbyterian: After its quick visit among the nation's elite in Knoxville, the Blue Hose return to Clinton, South Carolina, for a Friday night meeting with Bob Jones University.

Tennessee: The Vols have a couple tough tests on the near horizon. They play at Colorado on Saturday. On Dec. 7, they face Texas Tech in the Jimmy V Classic at Madison Square Garden.