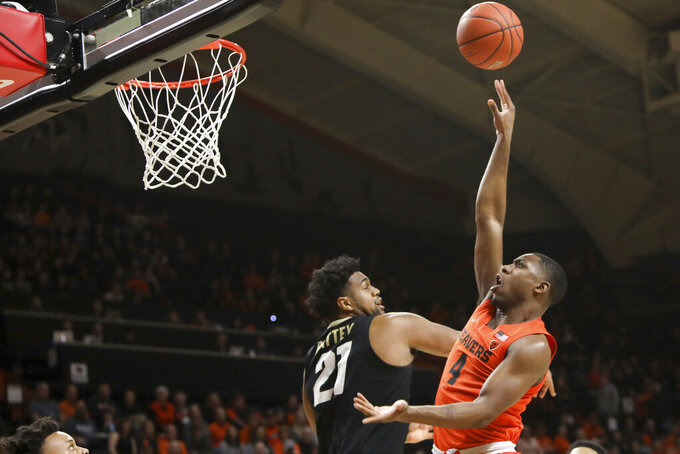 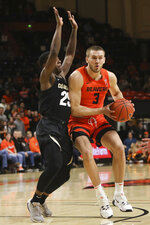 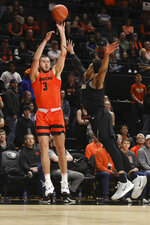 The Buffaloes’ 6-foot-8 junior forward was coming off a season-low four points in Thursday’s 68-60 loss at No. 17 Oregon and was “super fired up” to made amends for that performance.

“I wanted to get back on the court and compete, and get back to what I do,” said Bey, who came into the game averaging 13.2 points and 9.0 rebounds.

The Buffaloes moved into sole possession of first place in the Pac-12 Conference. Oregon, which started the day tied for the league lead, hosts Utah on Sunday.

Colorado led by 12 points in the second half of the teams' first meeting on Jan. 5 in Boulder, but the Beavers rallied for a 76-68 win.

There was no second-half comeback for Oregon State in the rematch. Colorado squandered a nine point halftime lead in Thursday’s loss at Oregon.

“We just had to stay solid and come out and keep being solid on defense,” sophomore guard Eli Parquet said.

Thompson converted a three-point play on a drive and dunk to cut the lead to 41-32 with 14:48 left. The Beavers didn't get any closer than nine points the rest of the game.

The lead grew to as many as 24 points.

“We started slow,” Tinkle said. “We were getting open looks, missing shots and over 40 minutes that wears on you."

“Take away 3’s and play with energy. That’s what we did today,” Bey said. “We definitely redeemed ourselves from last game and we took care of business."

The Buffaloes scored the last five points of the first half and led 31-22 at the break, helped by Bey’s 10 points.

Oregon State struggled from the field in the first half against Colorado’s man-to-man defense, connecting on just 33.3% of its shots, including 1 of 10 on 3-pointers.

Colorado has reached 20 wins for the second season in a row, and seventh time under coach Tad Boyle.

“When you get there you know you’ve had a decent year,” said Boyle, who is in his 10th year. “But we’re not satisfied with decent. We want great."

Colorado: The last time Colorado was in first place this late in the season was in 1968-69, when the Buffaloes claimed the Big Eight championship. ... Colorado has won four of its last five games.

Oregon State:. Tinkle, who is the second-leading scorer in school history behind Gary Payton, continues to struggle from the field. He was 3 for 15 Saturday and is shooting 32.9% in the Beavers’ last seven games.

Oregon State: At Arizona on Thursday.