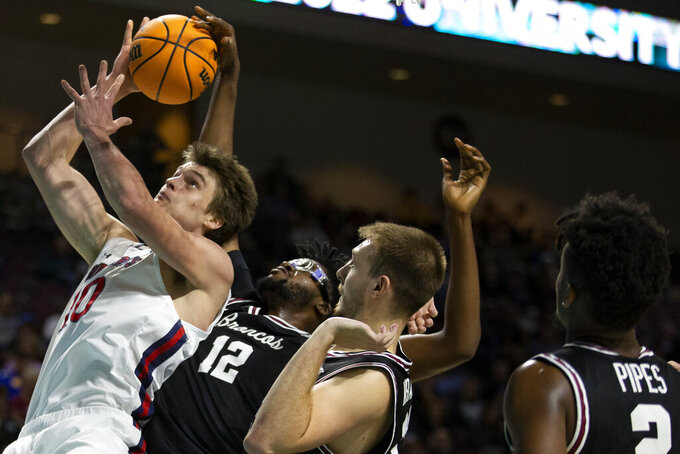 LAS VEGAS (AP) — Saint Mary's watched its advantage dwindle to one and Santa Clara's leading scorer driving to the basket in the closing seconds.

Logan Johnson stepped in, blocked Jalen Williams' shot and made two free throws after being fouled.

One big defensive play, two key free throws and the Gaels are headed back to the West Coast Conference tournament title game.

“That's what he's been doing all year long,” said Saint Mary's Matthias Tass, who had 18 points. “He's an anchor for our defense.”

The Gaels (25-6) shut down one of the nation’s best-shooting teams for most of the night, building a 15-point lead.

The Broncos (21-11) came charging back, pulling within 73-71 on Keshawn Justice's 3-pointer with 42 seconds left, and got the ball back after Jalen Williams blocked Kuhse's layup attempt.

Williams then drove the lane in an attempt to give the Broncos the lead, but was blocked by Johnson. Williams' 3-point attempt at the buzzer hit off the side of the rim, sending the Gaels rushing out onto the floor in celebration.

Saint Mary's moves on to meet No. 1 Gonzaga in the title game for the fifth time in seven years.

Justice and Josip Vrankic led Santa Clara with 17 points each.

“That just comes with who we've been all year,” said Justice, who went 4 of 6 from 3. “We were down double figures a couple times and that’s what our team does, we’re going to keep fighting, keep battling back.”

The Gaels had their biggest win of the season in their last game, rolling over No. 1 Gonzaga 67-57 in Moraga. The victory, Saint Mary's fourth straight, likely locked up an NCAA Tournament bid and showed the Gaels are a legitimate threat to unseat Gonzaga as WCC tournament champions.

First, they had to get by Santa Clara.

The Broncos' sixth season under coach Herb Sendek has arguably been their best. Santa Clara has its most wins since 2012-13 and put itself on the NCAA Tournament bubble with one of the nation's sharpest-shooting offenses.

The Broncos needed a little time to get going in the third go-round after blowing out Portland the night before.

The Gaels did not.

Led by the crafty Kuhse, Saint Mary's hit nine of its first 11 shots, building a 10-point lead in the opening eight minutes. The Gaels pushed the lead to 13 but couldn't sustain the shooting pace as the Broncos started to find the range.

Santa Clara scored the final seven points of the first half to pull within 39-34.

“We had chances, I thought, to put it away and just kept messing it up," Saint Mary's coach Randy Bennett said.

Kuhse kickstarted the Gaels again to start the second half, opening with a layup then hitting consecutive 3-pointers in an opening 10-0 run. Saint Mary's pushed the lead to 15 only to have the scrappy Broncos mount a furious charge.

The Broncos had their chances late, but came up just short, thanks in large part to Johnson's block.

“That's something we'll live with, having the ball in Jalen's hands, coming downhill, getting to his spot,” Santa Clara coach Herb Sendek. “Guy made a good play.”

Santa Clara didn't play with its usual offensive efficiency, yet still found a way to rally in the closing minutes. The Broncos came up just short — in the game and likely an NCAA Tournament bid.

Saint Mary's dominated for much of the game, allowed Santa Clara to claw its way back and made the biggest plays down the stretch to earn another shot at Gonzaga.

Santa Clara: Awaits word where it will play in the postseason.