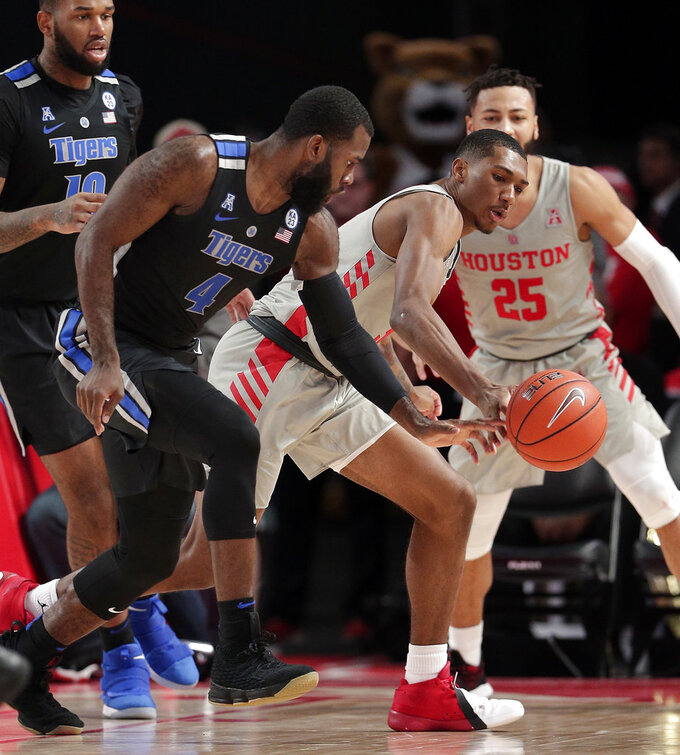 Memphis guard Raynere Thornton (4) has the ball knocked away for a turnover by Houston guard Armoni Brooks (3) during the second half of an NCAA college basketball game Sunday, Jan. 6, 2019, in Houston. (AP Photo/Michael Wyke) 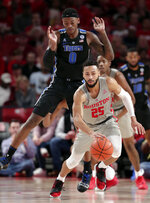 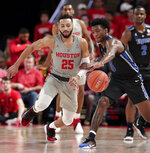 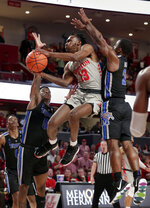 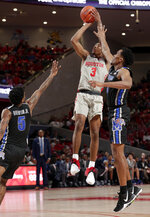 HOUSTON (AP) — When Houston needed a spark Sunday night, Armoni Brooks came through for the Cougars.

Brooks scored 16 of his 22 points in the second half and hit four of his six 3-pointers and No. 19 Houston remained undefeated with a 90-77 victory over Memphis.

"They were more physical," Brewton said. "We have to pick it up. This has happened in three, four games in like our biggest games."

"We always talk about punching first and hitting first coming out of the gate," Hardaway said. "Again today, I don't know why, but we weren't ready at the start of the game and got them in a good rhythm."

After Memphis cut it to 57-51 on Martin's layup with 14 minutes remaining, Houston responded with a 17-4 run to build a 19-point lead on Jarreau's layup with 9:40 remaining. Brooks had nine points in the run. The Tigers got no closer than 13 the rest of the way.

"A lot of the shots were coming in transition," Brooks said. "In the huddle, we were talking about getting stops. We started with getting one stop then two stops then three stops. Once we get a stop, that leads to our transition offense, and that's where we really feel we are the best."

After Brewton's jumper cut Houston's lead to 24-20 with eight minutes left in the first half, the Cougars responded with an 8-0 run to take a 32-20 lead with 6:55 remaining before halftime. Houston led 45-34 at the half.

Memphis: The Tigers continue to be competitive, with four of their six losses coming to ranked teams. Memphis was outhustled throughout, with Houston holding advantages in rebounds, steals and turnovers. Outside of Brewton, Martin and Davenport, Memphis got 19 points on 5-of-18 shooting.

Houston: The Cougars had 28 points off 17 Memphis turnovers, outrebounded the Tigers 39-32, including 18-7 on the offensive glass. ... The Cougars played well throughout even with Davis, their leading scorer, on the bench for the final 16 minutes of the first half with two fouls. . Houston had 20 assists on 33 made field goals.

With the 2-0 week, Houston should move up in the rankings.

Houston: At Temple on Wednesday night.