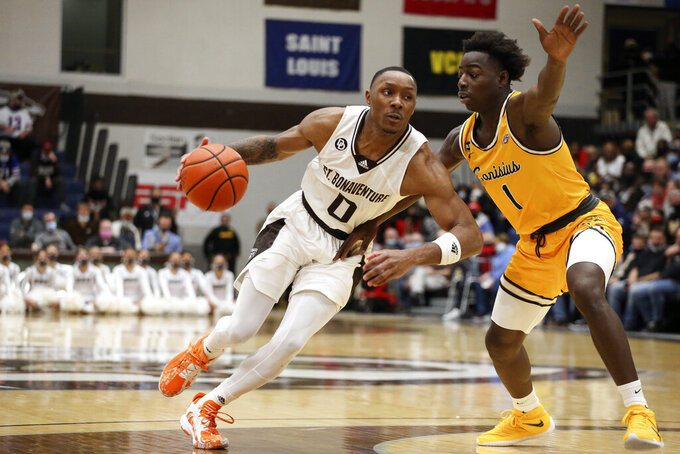 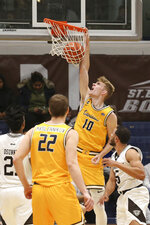 Jalen Adaway added 16 points for St. Bonaventure (2-0) in his season debut after he was suspended for the season opener for an NCAA rule violation.

Malek Green had 14 points and eight rebounds to lead Canisius (0-3) in the 169th meeting since 1920 between western New York’s “Little 3” rivals.

St. Bonaventure came back in the second half without center Osun Osunniyi, who aggravated a back injury while falling to the floor on defense. Osunniyi entered the day leading all active players in blocks, averaging 2.72.

Trailing 51-42 during a timeout with about 11 minutes remaining, St. Bonaventure’s other four senior starters huddled together.

“We looked at each other as seniors and said we are not losing,” Holmes said. “It just shows our togetherness overall, as a group.”

“We played much harder in the last 10 minutes of the game,” St. Bonaventure coach Mark Schmidt said. “Almost like a sense of desperation. We know it’s a rivalry, and it’s always going to be a tough game.”

Canisius led for much of the early part of the game and went on a 14-3 run take a 31-26 advantage into halftime. Jacco Fritz dunked for a double-digit lead, 41-30, in the second half.

St. Bonaventure turned up its defensive pressure in the second half and scored 15 points off turnovers, mostly on fastbreaks. The Bonnies also held the Golden Griffins to two field goals over the final 11 minutes.

“We had a couple bad turnovers that we couldn’t defend,” Canisius coach Reggie Witherspoon said. “If you are looking for a momentum shift, typically it’s a couple turnovers that lead to breakaways.”

Canisius: Beat a less-experienced Bonnies team that was battling injuries in 2019, but couldn’t hold on to upset a ranked opponent for first time in 21 opportunities since 1994. The team is searching for its first nonconference win in two seasons after opening with losses at Miami and East Carolina.

St. Bonaventure: Rallied in the second half for a second home win against an in-state rival from the lower-rated Metro Atlantic Athletic Conference — but it wasn’t expected to be such a hard-fought victory. The competition level will rise for program that is ranked in Top 25 for the first time in 50 years as it travels away from home.

St. Bonaventure had to overcome an early 10-point deficit in its opening win against Siena. The trend carried over from a scrimmage with Kent State and exhibition game against Division III Alfred State, Lofton noted, and the Bonnies don’t want it to continue in against more challenging opposition.

“We have to come out strong,” Lofton said. “Every single game, we’ve come out slow. We have to emphasize jumping on them first before they get on us. It’s hard to come back from trailing every game.”

St. Bonaventure might benefit from No. 20 Florida State’s loss to Florida. But struggling to separate itself from a team predicted to finish near the bottom of the MAAC won’t impress voters.

Canisius: At Cleveland State on Saturday in the last of four road games to open the season.