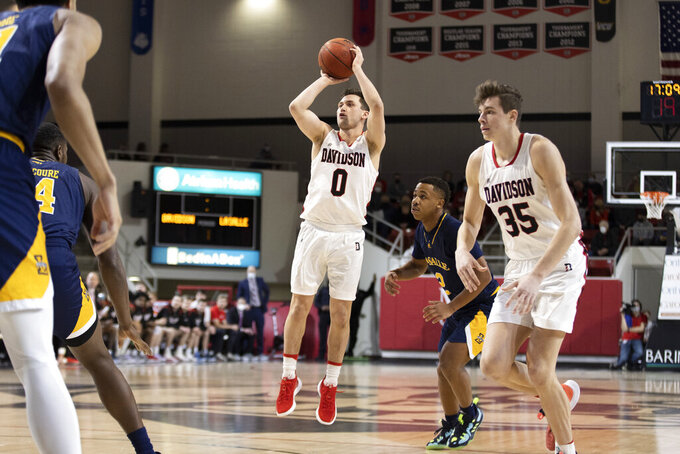 Davidson guard Foster Loyer (0) attempts a three-point shot during the first half of an NCAA college basketball game against La Salle on Saturday, Jan. 29, 2022, in Davidson, N.C. (AP Photo/Brian Westerholt) 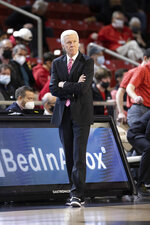 Hyunjung Lee had 14 points, including four clutch free throws in the final minute, and Sam Mennenga provided some muscle inside with eight points and eight rebounds for the Wildcats. Davidson (17-3, 7-1 Atlantic 10) bounced back from a 70-68 loss to VCU on Wednesday night, just two days after entering the AP Top 25 for the first time since 2015.

Jack Clark had 18 points for La Salle (6-12, 1-7), which has lost eight of its last nine and remains winless on the road this season.

It was Brajkovic's eighth straight double-digit scoring game. The 6-foot-10 lefty forward has averaged 18.8 points per game during that span.

“Oh, he's unbelievable,” La Salle coach Ashley Howard said. “He can go over either shoulder. He can shoot the ball well and he rebounds the ball well. Those guys (Davidson) have a connection and a chemistry because they have played together for some time.”

Davidson took control early, jumping out to 8-0 lead as the Explorers missed their first six shots from the field. The Wildcats never trailed.

La Salle trailed by 15 in the second half before it stepped up its pressure defense, created some turnovers and began methodically chipping away at the lead. When Jhamir Brickus scored on a drive through the lane to cut the lead to 73-69 with 58 seconds left it put the home crowd on edge.

But Davidson iced the game with solid free throw shooting.

“It was hard losing because we're not used to losing anymore,” Brajkovic said. “We hadn't lost since November. But nobody really hung their head. We knew what we had to do to get back and start a new winning streak.”

“They are the building blocks here — the basement, the first floor, the second floor,” McKillop said. “We have been able to build a house because of what they did.”

La Salle: The Explorers battled hard, but just didn't have enough offensive firepower to compete with Davidson. Howard said he was proud of his team's effort and feels like they are improving, even as they struggle to find wins. “We have a team that has a lot of new pieces that are trying to come together," Howard said. "They believe in each other and they don't quit.”

Davidson: After the loss to unranked VCU, the Wildcats are likely fall out of the AP Top 25. They're still first in the A-10, however, and certainly have another chance to climb back in if they can start another win streak.