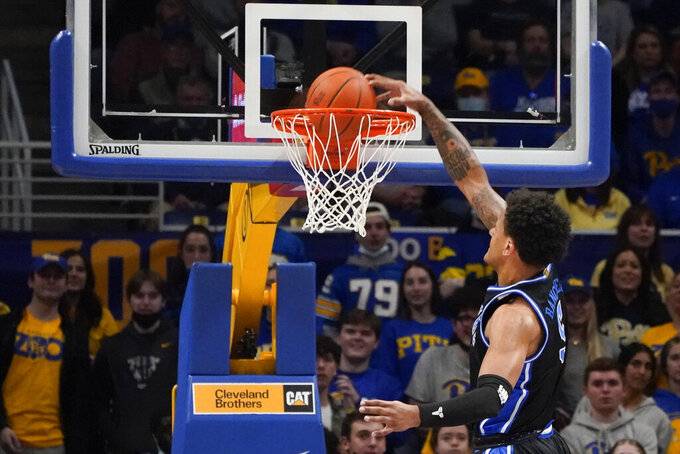 Duke's Paolo Banchero (5) dunks against Pittsburgh during the first half of an NCAA college basketball game, Tuesday, March 1, 2022, in Pittsburgh. (AP Photo/Keith Srakocic) 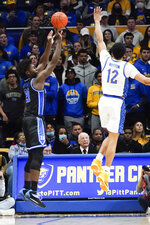 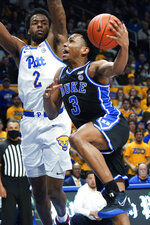 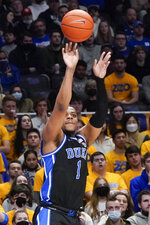 PITTSBURGH (AP) — Mike Krzyzewski is attempting to stay in the present, even as the days slip by and the going-away presents and “last” milestones keep piling up. Even as retirement looms whenever Duke's season — and Krzyzewski's remarkable coaching career — ends at some point over the next five weeks.

So Krzyzewski didn't bother to tell his players he was walking onto the court as the visitor for the final time when the fourth-ranked Blue Devils faced Pittsburgh on Tuesday night. Doing so would make it about him. And that is the one thing Krzyzewski is trying to avoid above all else.

“I didn’t talk to them about ‘it’s my last road game, guys win it for me,'” Krzyzewski said. "I want it to be their moment.”

A moment the Blue Devils increasingly look like they're capable of seizing.

Freshman guard Trevor Keels scored a career-high 27 points, Paolo Banchero added 21 and Duke clinched at least a share of its 13th Atlantic Coast Conference regular-season title under Krzyzewski with an 86-56 win over Pittsburgh.

The Blue Devils (26-4, 16-3) wasted little time making sure Krzyzewski would pick up his ACC-record 201st road win, taking a 13-point lead before the game was four minutes old and cruising.

“It started on defense for us,” Keels said. "When we defend like that, start off the game defending, worrying about defense, we’re good shooters, the ball is going to go in.”

Two of the losses have come at the Petersen Events Center since Pitt (11-19, 6-13) joined the ACC in 2013, including a stunning upset by the Panthers a year ago that led Pitt forward Justin Champagnie (since departed to the NBA) to proclaim “Pitt is back."

Not so much. The chasm between the Panthers and the Blue Devils was on display from the opening tip. The Blue Devils are bigger, deeper and more talented and had no trouble locking up the top seed in next week's ACC tournament with ease.

“I like where my team is at right now,” Krzyzewski said. "We just got through playing three games in six days on the road, so to end up in first playing those three road games, it says a lot about these kids.”

“They’re a really good team,” Hugley said of the Blue Devils. "They were putting the ball in the hoop. You have to make adjustments to stop it. Our defense had to get picked up.”

It didn't as Duke won its seventh straight to earn at least a share of the ACC regular-season title for the first time since 2010. The Blue Devils captured the ACC tournament, too, that season on their way to the fourth of the program's five national titles under Krzyzewski.

The Hall of Famer's final team at Duke remains a work in progress, but the Blue Devils have been the class of the ACC during a down year for a powerhouse league Krzyzewski has helped define for more than four decades.

Duke's three conference losses have been by a combined four points, and they head into Krzyzewski's final game at Cameron Indoor Stadium on Saturday night against North Carolina with some serious momentum. The Blue Devils' last two wins have come by a combined 55 points.

Pitt coach Jeff Capel played and coached under Krzyzewski before leaving to join the Panthers in 2018. Capel made it a point to honor his friend and mentor during a pregame ceremony that included a videotaped message featuring Capel, as well as former Duke star Dick Groat.

“Congratulations on the most amazing career in basketball," Capel said. “You’ve given so much to the game and so much to us ... I love you.”

Capel later presented Krzyzewski with a steel sculpture of a fist, with the four fingers and the thumb signaling the five pillars of Krzyzewski's pillars of success, something he as employed during his stints at Army, Duke as well as USA Basketball.

The fist served as a metaphor for what awaited the Panthers, who were overwhelmed in the opening minutes as Duke raced to a 16-3 lead and was never really threatened.

Despite the comfortable margin, the 75-year-old Krzyzewski remained fully engaged.

After Hughley opened the second half with a dunk, Krzyzewski sprung off the bench to employ Banchero to be more active, a talking-to that continued even after Duke quickly went back down the court to score.

Krzyzewski animatedly led a timeout huddle even with his team up 24 and less than eight minutes to go, gesturing at each of his five players on the floor during the entire break, trying to soak in as much of his 47th and final season on a college sideline as possible.

Duke: Goes for the season sweep of the Tar Heels on Saturday night. The Blue Devils raced by North Carolina 87-67 in Chapel Hill on Feb. 5.

Pitt: Travels to Notre Dame on Saturday. The Fighting Irish edged the Panthers 68-67 on Dec. 28.