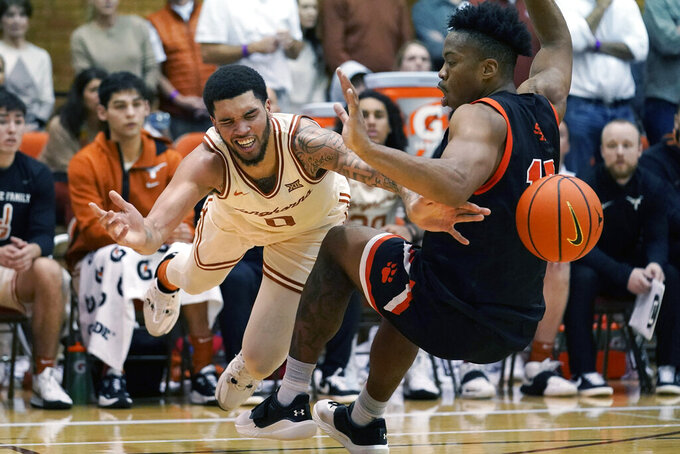 AUSTIN, Texas (AP) — New Texas coach Chris Beard is doing everything he can to pump energy into the Longhorns’ program. The latest was a trip into the past with only students and some friends of the program invited to join in.

Seventh-ranked Texas returned to the cozy and cramped Gregory Gym in the heart of campus, a venue the team last played in nearly 50 years ago, and the Longhorns defeated Sam Houston 73-57 Monday night.

The Longhorns left Gregory Gym behind when the spacious, but soon-to-be-demolished, Frank Erwin Center opened in 1977. Beard made a one-game return to the 3,234-seat Gregory Gym, with only students and some VIPs allowed to attend. It is all part of an homage to the program’s past and an invitation to join the party he’s trying to build for the future.

This party started before the game, at a campus gathering arranged by Beard, who then accompanied students on a walk to the gym. The official attendance was 2,834.

Marcus Carr, a senior who transferred to Texas from Minnesota, scored a season-high 19 points, converting 4 of 7 3-pointers. Carr enjoyed his night at Gregory.

“This is one of the best environments I've been in,” Carr said.

Beard hopes the students will continue attending games when the Longhorns return to the Erwin Center.

He began Monday averaging 6.4 points with a season-best of 11 points. Carr has spent the early part of the season focusing on distributing the ball and improving his defense. He had converted only 3 of 13 3-pointers.

“We wanted to keep (Carr) out of the paint,” Hooten said. “Gotta pick your poison.”

Said Carr, “It definitely was nice to see the ball go in, but it has not been my focus.”

Savion Flagg, a graduate transfer from Texas A&M, led Sam Houston (2-5) with 16 points and eight rebounds. Demarkus Lampley and Javion May each scored 11. May had eight rebounds.

Hooten said playing in a cramped arena might help his team later in the season, during some Western Athletic Conference games.

“I think that’s something that we needed for sure,” Hooten said. “You know, a couple times they couldn’t hear me when I was calling a play.”

Sam Houston: The Bearkats have not shot well early in the season. They began the game ranked 339th nationally in field-goal accuracy (37.5%) and 263rd in 3-point shooting (30.6). Late in the first half, Sam Houston was at 50% inside and outside the line, but the Bearkats missed their last six shots.

Texas: The Longhorns have only been truly tested once this season, an 86-74 loss at then-No. 1 Gonzaga. Their other games, all wins, were against a collection of much smaller programs from outside the power six conferences.

Hooten said Beard, a friend for 30 years, didn't want to play against him.

“It's a big game for us financially," Hooten said. “I kept begging him and begging him. He said, "OK, I’ll play you, but I’m only going to play you in that little bitty gym with that thing completely packed. It’s a good trip for us because it’s two half hours. It’s good for us to get down here and play in this kind of environment against a top 10 team.” UP NEXT