No. 9 Purdue gets past Michigan State 75-70, into title game 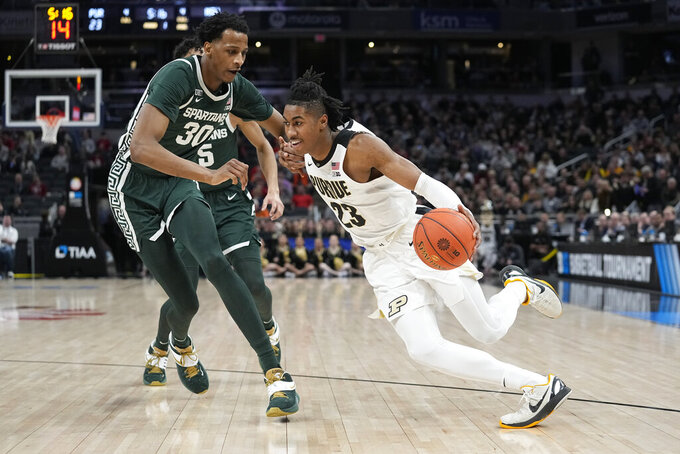 Purdue guard Jaden Ivey (23) goes to the basket against Michigan State forward Marcus Bingham Jr. (30) during the first half of an NCAA college basketball game in the semifinal round at the Big Ten Conference tournament, Saturday, March 12, 2022, in Indianapolis. (AP Photo/Darron Cummings)

Now he's in position to lead the third-seeded Boilermakers to a championship that's already eluded them once this season.

“Tomorrow’s a big game for us,” Ivey said. “We didn’t win a regular-season championship. That was a goal of ours and we fell short. Tomorrow we have a chance to win a championship and take it home."

The Boilermakers will make their first title game appearance since 2018 on Sunday against No. 24 Iowa (25-9).

For Ivey, it was a sensational day inside the building his mother, Notre Dame coach Niele Ivey, once called home as a member of the WNBA’s Indiana Fever. He went 7 of 14 from the field, made two 3s and six of eight from the free-throw line while frequently converting nifty drives into points. The result: Purdue (27-6) has won three straight to reach its first Big Ten title game since 2018.

Ivey also provided gasps from a noticeably favorable crowd when he fell hard to the ground, off-balance on the game-sealing breakaway layup that made it 69-59 with 1:50 left. He stayed down briefly and appeared to be rubbing his tailbone before getting up and finishing the game.

But the Spartans (22-12) fared far worse in the injury department. Starting point guard Tyson Walker left in the first half with what appeared to be a sprained ankle and did not return. His replacement, sophomore A.J. Hoggard, turned his ankle on the next possession. Hoggard also left but did return and finished with 17 points and 10 assists, though the injuries left Michigan State precariously thin.

“The doctor told me we lost two point guards in 23 seconds or something like that,” Michigan State coach Tom Izzo said. Tyson, the one thing he would have given us, was the way they play ball screens, he could have really helped us. I don’t know how bad it is. It’s not broken or anything, but it’s bad enough it’s going to be some time.”

It wasn't just Ivey making a difference against the Spartans, who had a three-game winning streak snapped.

Michigan State last played in the conference title game in 2019, and when the Spartans cut the deficit to 57-56 on Hoggard's jumper with 5:45 to go, it looked like the drought might end.

Instead, Hunter knocked down consecutive 3s, and after Williams made one of two free throws, Hunter scored on a layup to give the Boilermakers a 66-56 lead with 3:31 remaining. They were the only 3s for Hunter in the game and he finished with 11 points.

Michigan State spent the rest of the game futilely playing catch-up in a close contest featuring two of the conference’s perennial powers and the league’s longest-tenured coaches.

“When they cut it to one right there, they showed some grit really to make some plays," Purdue coach Matt Painter said. “I thought that was the decisive stretch."

Michigan State: After losing five of their last seven regular-season games, the Spartans rebuilt their confidence and should take some momentum into the NCAA Tournament. They fended off Maryland on Thursday, beat regular-season co-champ Wisconsin on Friday and challenged perhaps the league's top team until late on Saturday. But the injuries could impact Michigan State's seeding.

Purdue: The Boilermakers now have a second chance to win a league title. While two wins in two days may have locked up a No. 2 seed in the 68-team NCAA Tournament field, a win Sunday would almost make it a certainty.

The Boilermakers have been the highest-ranked Big Ten team most of this season, and that's not likely to change now. They've been in the top 10 for a school-record 18 consecutive weeks. A win Sunday would extend that record in Monday's rankings.

Michigan State: Gabe Brown scored 16 for the Spartans. ... Marcus Bingham Jr., Max Christie and Malik Hall each finished with nine points. ... Bingham and Christie also each had six rebounds. Brown had four. .. The Spartans were 7 of 25 on 3s in their third game in three days.

Michigan State: Waits for the NCAA Tournament selection committee to announce the field Sunday. Purdue: Will chase its first conference tourney crown since 2009 on Sunday.