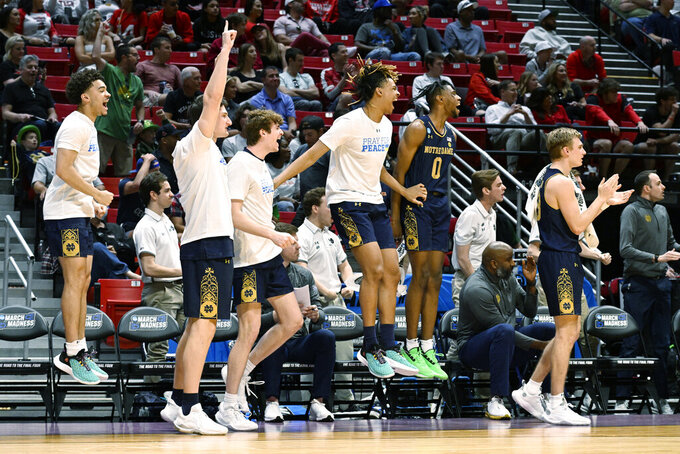 Notre Dame players react on the bench during the first half of a first-round NCAA college basketball tournament game against Alabama, Friday, March 18, 2022, in San Diego. (AP Photo/Denis Poroy) 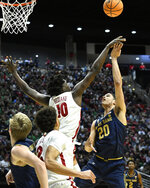 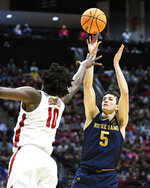 Cormac Ryan scored a career-high 29 points, including seven 3-pointers, and 11th-seeded Notre Dame recovered from a grueling First Four win and late-night flight to beat sixth-seeded Alabama 78-64 on Friday in the first round of the NCAA Tournament.

“I mean, I was just letting it fly. And when you have it rolling, you have it rolling. So picked a good night for it, I guess,” Ryan said. “To be able to grit it out — people were saying double overtime, long flight, legs are going to be tired. We were gunning and we were ready to go.”

Ryan, was 10 of 13 from the field and made a career-best seven of his nine tries from beyond the arc for Notre Dame (24-10), which beat Rutgers in double OT Wednesday night in Dayton, Ohio, to earn a trip to San Diego.

Even though Notre Dame goes with only a seven-player rotation, Ryan said the cross-country flight and playing two games in less than 48 hours might have been a benefit.

“We kind of rolled into California with that hunger. And I think the quick trip actually helped us because we were still hungry. It was like we just got off the court; put us back on, we’re ready,” he said.

Blake Wesley had 18 points while Paul Atkinson Jr. added 13 points and eight rebounds. The Fighting Irish missed six of their first seven shots but went 28 of 47 the rest of the way.

"I mean, gotta give Notre Dame a lot of credit to play in a play-in game and go double overtime, fly in here as late as they did, play with one-day rest and give the energy they got," Alabama coach Nate Oats said. “We talk in college about veteran college players. I think it showed today.”

Keon Ellis led Alabama (19-14) with 16 points and Jaden Shackelford scored 13. Junior point guard Jahvon Quinerly suffered a left knee injury early in the game and did not return. His knee was in an immobilizing brace when he came back to the Crimson Tide bench.

Oats said the injury was “significant,” adding that Quinerly would have an MRI after the team returns to Tuscaloosa.

“He’s a big piece of what we do. We definitely felt the impact of losing him,” Ellis said.

Notre Dame will play Texas Tech Sunday in the second round of the West Region. The third-seeded Red Raiders breezed to a 97-62 victory over Montana State earlier Friday.

The Irish had a 41-36 advantage at halftime. Alabama scored six straight points early in the second half to get within 44-42 before Notre Dame pulled away with a 17-5 run. Ryan and Wesley each had six points during the spurt and Atkinson added five.

Ryan's final 3-pointer, an off-balance shot from the corner, rolled around and went in as the shot clock expired to put the Irish up 66-55 with 4:55 remaining. Notre Dame's largest lead was 16 points (76-60) with under two minutes remaining.

Coach Mike Brey — who's in his 13th tournament with Notre Dame and 15th overall — credited his team's adjustments in the second half, when it held Alabama to 12 of 32 from the field. Alabama had two scoring droughts of more than three minutes.

“Really the last 30 minutes we defended. We couldn’t guard them early. And certainly they’re a different team when Quinerly goes down, and it looked bad and I feel for him because he’s a heck of a guard,” Brey said. “I'm thrilled about our resiliency and belief on wanting to survive and advance in this tournament.”

Neither team led by more than four points the first 18 minutes before Notre Dame scored nine straight points to grab a 41-33 advantage with 40 seconds left in the first half. Nate Laszewski had the first five points during the run, including a layup to give the Irish the lead. Juwan Gary hit a 3-pointer to draw Alabama within five points at halftime.

Quinerly was driving to the basket when his knee appeared to buckle three minutes into the game. The junior guard was moaning in pain as he was clutching his knee while being looked at by trainers. He was then taken to the locker room without putting much weight on his left leg.

“I feel for Jahvon. I thought he was ready to play. He had a great few weeks of practice,” Oats said.

Quinerly was second on the Crimson Tide in scoring, averaging 13.8 points. Freshman JD Davison took over at the point and scored 11 points in 36 minutes.

Notre Dame: The Irish made 10 3-pointers, the sixth time in the past 11 games they've reached double digits in 3s.

Alabama: The Tide made consecutive NCAA appearances for the first time since 2006 but ended their season with four straight losses.

Notre Dame seeks its first Sweet 16 appearance since 2016, when it made the Elite Eight.