Oregon State embraces its underdog role in the NCAAs 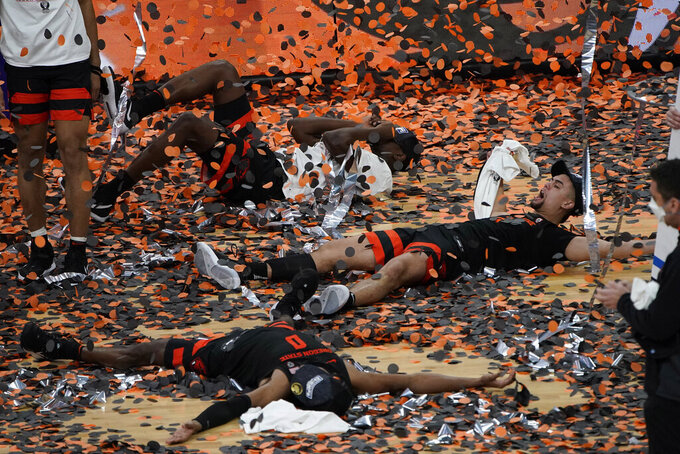 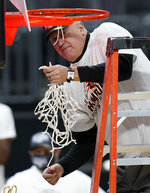 As Oregon State's players celebrated their unlikely Pac-12 tournament title, former teammate Tres Tinkle was in the stands with his arms raised, one finger extended on one hand and two on the other.

It's clear what the "12" he was signaling meant. That's where the Beavers were picked to finish in the conference.

Instead, the first-time Pac-12 tourney champions are headed to the NCAA Tournament. As the 12th seed — ironically enough — the Beavers will face fifth-seeded Tennessee on Friday in the Midwest Region.

The number 12 has become something of a talisman for the team from Corvallis. It's even on a patch sewn inside the team's jerseys.

“That was kind of our rally cry down the stretch. And then when they saw that we popped up as the 12th seed, everybody looked like, ‘Yep. This is going to mean something, something special.’ So we’ll keep milking it," coach Wayne Tinkle said. "We’ll keep milking it for sure."

Oregon State (17-12) is among five Pac-12 teams in the tournament, joining Oregon, which has made the field for seven straight seasons under coach Dana Altman, as well as USC and Colorado. UCLA faces Michigan State in a First Four game.

The Pac-12 hasn't had this many teams in the tournament since 2016, when it had a record seven make it.

But Oregon State and Colorado (22-8) have not reached this level in recent years. The Beavers have made the tournament just twice since 1990, most recently in 2016.

The Buffaloes, who also haven't been to the tournament since 2016, have the school's best-ever seed at No. 5. They'll face No. 12 Georgetown on Saturday in the East region.

“I'm very proud of our guys and how they've handled themselves this season. I want it bad for them," Colorado coach Tad Boyle said. "Because I always say, you know, I'm going to be coaching here again next year. We've got seven seniors that may not be with us. So you want to make the most of your opportunities.”

USC, which hasn't been to the tournament since 2017, is seeded sixth in the West and set to play the winner of the preliminary round game between Drake and Wichita State. Seventh-seeded Oregon plays No. 10 VCU on Saturday in the West.

Coach Tinkle's son, Tres, who held up the No. 12 at the title game, graduated last year as Oregon State's all-time leading scorer and most recently played for the Raptors 905 of the NBA G-League. Last year, the Beavers were set to play Oregon in the Pac-12 tournament quarterfinals when the season was shut down by the coronavirus.

Wayne Tinkle said he was disappointed he wasn't able to coach a tournament game with Tres on the court. The younger Tinkle was on the 2016 Beavers team that went to the NCAAs, but was injured.

So the coach dedicated the Pac-12 championship to his son.

“Tres worked so hard to try to lead us back to a place we hadn’t been in a while. And it just seemed like things didn’t go his way. Obviously, this is this year’s team and we’ve done some incredible things, but I really wanted to share that with him," he said.

After the big win over Colorado on Saturday, players celebrated in their hotel by singing the team's theme song “Ain't no Mountain High Enough,” before leaving for Indianapolis the next day.

“For years I’ve had a tradition,” Tinkle said, “whenever we‘ve won on the road, we’ve played ’Ain’t No Mountain High Enough' on the bus, and the team has to sing it.”

Perhaps they'll sing it on Friday night, too.

“It’s just incredible that we have gotten to this level, and we know why we have, but it’s a pretty neat deal,” the coach said. “But we’re going to keep this thing rolling. Orange Express is back, baby.”