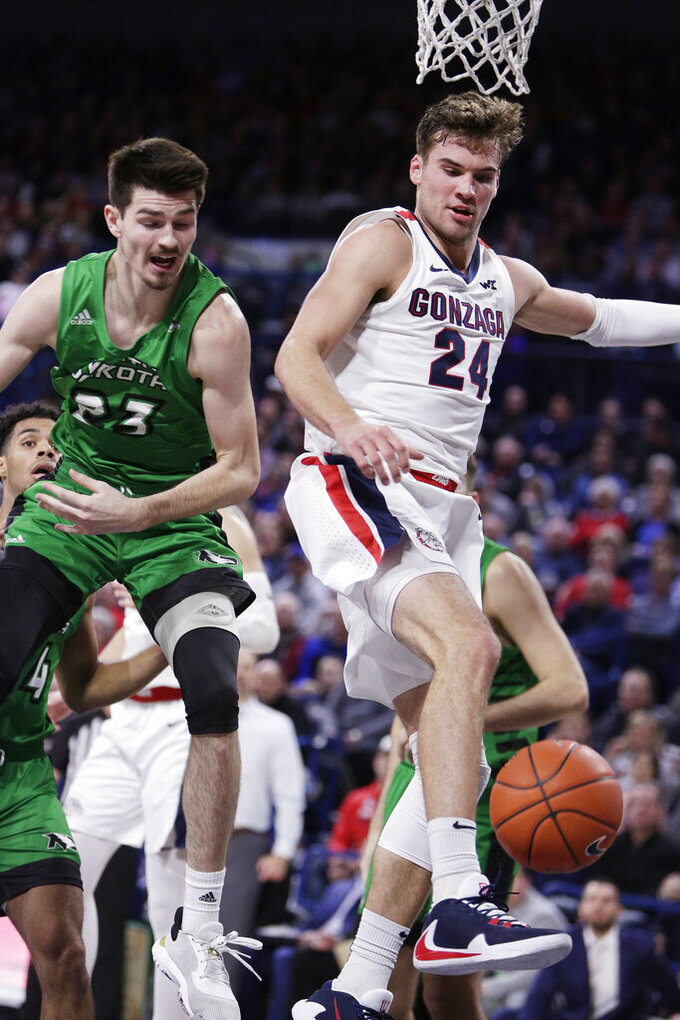 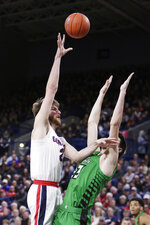 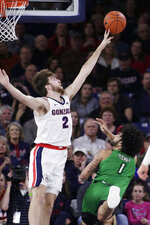 SPOKANE, Wash. (AP) — Gonzaga had no tape of North Dakota to study, so coach Mark Few said his staff improvised on the fly.

Filip Petrusev had 19 points, 15 rebounds and four blocked shots as eighth-ranked Gonzaga used a superior inside game to beat North Dakota 97-66 on Tuesday.

Getting the ball in the paint proved to be a good strategy.

"We feel it's going to be one of our strengths this year," Few said, citing the play of Petrusev, Drew Timme, Anton Watson and Corey Kispert.

Kispert scored 20 points, Timme had 16 and Watson added 15 for Gonzaga (3-0), which has romped to victory in all three games. Six Bulldogs scored in double figures.

The Zags have won all six meetings with the Fighting Hawks.

Marlon Stewart scored 21 points and Filip Rebraca had 16 points and 13 rebounds for North Dakota (1-1), which took Gonzaga to overtime before losing here in 2017.

No such thriller this time, as Gonzaga held the Fighting Hawks to 34.7% shooting and outrebounded them 53-29.

"Our low post defense was really good," Few said. "Filip had a good rebounding night. That's a good positive sign for us."

The Bulldogs figure to be even stronger inside when forward Killian Tillie returns from knee surgery. "When he's ready to play, he'll play," Few said when asked when Tillie would return.

The Zags face their biggest test of the season at Texas A&M on Friday.

"We're excited to go down there," Petrusev said. "It's going to be tough down there."

Gonzaga jumped to a 15-2 lead as North Dakota missed eight of its first nine shots.

Kispert and Admon Gilder each hit 3-pointers as Gonzaga built a 25-9 lead.

The Bulldogs replied with a 14-1 run.

Gonzaga led 55-36 at halftime, after holding the Fighting Hawks to 35% shooting and outrebounding them 28-14 in the first. The Zags finished with 13 offensive rebounds and 22 second-chance points.

"We really tried to get offensive rebounds and easy baskets," Petrusev said.

Gonzaga pushed the lead to 65-40 midway through the second half behind three consecutive baskets by Watson.

"We started out a little nervous, but we responded well after the first timeout," Sather added. "We started competing, worrying less about who we were playing against."

North Dakota: Freshman De'Sean Allen-Eikens scored 22 points in a season-opening win over Crown, but was held in check and finished with 10 points Tuesday. North Dakota has never beaten a ranked team since joining Division I in 2008. North Dakota has 11 returning letter winners, including four who started at least 16 games last season.

Gonzaga: The Bulldogs came in shooting 60% from the field, second in the nation. They average 102.5 points per game. They have six freshmen on their roster and one returning starter in Kispert. Gonzaga's 165 wins in the past five seasons are tops in Division I.

Gonzaga faces its toughest test of the young season at Texas A&M on Friday. "Now we'll step it up and play some real athletes with real size," Few said. "The athleticism is going to jump up."