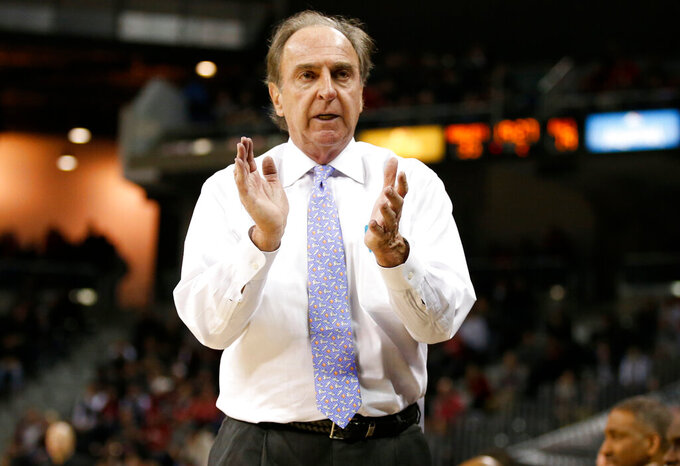 FILE - In this Jan. 24, 2018, file photo, Temple head coach Fran Dunphy cheers his team during the second half of an NCAA college basketball game against Cincinnati in Highland Heights, Ky. Dunphy is ready to call it quits after a nearly 50-year coaching career that includes the last 13 with the Owls. He will coach his final home game on Saturday, March 9, 2019, and remained hopeful the Owls can make the NCAA Tournament. (AP Photo/Gary Landers, File)

PHILADELPHIA (AP) — Fran Dunphy has a book about Tiger Woods on his night table and piles of books in his office at Temple that are mostly unread.

With the Owls on the brink of securing an NCAA Tournament bid, Dunphy's in-season page-turners are mostly scouting reports.

"When I wake up at night, I'm looking at film," Dunphy said.

It's the kind of late, late show that's nearing the final credits.

Dunphy is stepping down at the end of the season — with the Owls at 22-8, March Madness could delay that final bow — and call it a career on one of the great runs in Philadelphia basketball history.

Up next for the 70-year-old Dunphy, the home finale Saturday against No. 25 UCF and a chance for the Owls to knock off one more Top 25 team and send him out of Philly a winner.

Dunphy's arc has touched nearly every Big 5 school in some way, from distinguished tenures on the bench at Penn and at Temple, to scholarly stops at Villanova and La Salle. He'll turn his latest program over next season to former Temple and Philadelphia 76ers star Aaron McKie.

"I would love to represent Temple in any way they see fit," Dunphy said.

He's lasted almost 50 years without a sniff of scandal, and has perhaps more good guy awards (including the 2018 Dean Smith Award for charity and community service) as conference championships.

As his coaching career ticks down to the final seconds, Dunphy has been loath to boast about his accomplishments, even as this season has turned into a farewell tour that earned him standing ovations at hated city rivals Villanova and Saint Joseph's.

He called the celebrations "understandingly uncomfortable" and would "just as soon crawl underneath the bleachers" than have the game pause for his brief wave of acknowledgment to a generous crowd.

Dunphy has waved off many of the tributes Temple had planned for Saturday and asked for the focus to stay on seniors, such as star Shizz Alston Jr.

"I haven't given it a whole lot of thought that this is going to be my last game," Dunphy said.

Plenty of Dunphy fans — from former players to famous coaches — have shown their respect through testimonials posted on Temple's website.

—"You've always been a coach's coach and I tell people all the time that you are the most genuine person in our profession." — Duke coach Mike Krzyzewski.

—"I consider you to be my 'brother.' To stand beside you has been an extreme pleasure and unsurpassed honor." — Saint Joseph's coach Phil Martelli.

—"All your success on the court are obvious. But more important, I believe, is the way you conducted yourself and the reaction that other people had toward you." — Spurs coach Gregg Popovich.

Dunphy (579-323) is not necessarily retiring from coaching, or retiring at all. He will continue to teach his "Management, Theory & Practice: From the Locker Room to the Board Room" class at Temple's business school, and he may expand the course to the spring semester. Some of his contemporaries moved on after leaving their long-time schools (like Princeton's Pete Carril to the NBA or UConn's Jim Calhoun to a Division III program). Dunphy won't rule another coaching gig, though it would take a heck of a job to leave Philadelphia.

"You would be foolish if you said never to anything. Who knows? Right now, it's not a plan that I have," he said.

Dunphy is ingrained in the Philly hoops fabric like few in the city's storied history. He played basketball at Philly high schools and went to games at the Palestra as a kid. He was co-captain under Tom Gola at La Salle, earned a master's degree at Villanova, won 10 Ivy League titles in 17 seasons at Penn and has lived in the same home since 1984.

He's been at home, with or without his bushy mustache, on North Broad since replacing outspoken Hall of Fame coach John Chaney at Temple in 2006.

"It's the faces you remember," more than the scores, Dunphy said.

The lone blemish on Dunphy's career is his lack of success in the NCAA Tournament. The Owls have won only two games under Dunphy while the Quakers, out of the Ivy League, had one in his 10 trips.

"Would have loved more success in the postseason, no question," Dunphy said.

Dunphy still had two years left on his contract when word spread at last year's Final Four of Temple's transition plan. It was before he told his family or his team. The headlines that hit Philly ("Replacing Fran Dunphy another wrong decision by Temple") fueled speculation he was pushed out.

"I think the timing of this has been great, to be honest with you," Dunphy said. "We sat down, we had great talks about how we're going to do this thing. I'm very much at peace with how this whole thing has been handled. I'm grateful to Temple and I'm happy for Aaron McKie and the new chapter in his life."

McKie takes over at a program that has had remarkable consistency on the bench. He'll become just the fifth coach at Temple since 1952. The Owls haven't played in a Final Four since 1958 and they haven't reached the Sweet 16 or Elite 8 since 2001.

But the Owls have continued to matter, even in the American Athletic Conference, and won plenty of big games because of the Big 5 lifer on the bench.

"I've been celebrated enough by being given this opportunity to coach college basketball in Philadelphia," Dunphy said. "No one's been more fortunate than me. That's how I feel about my life."