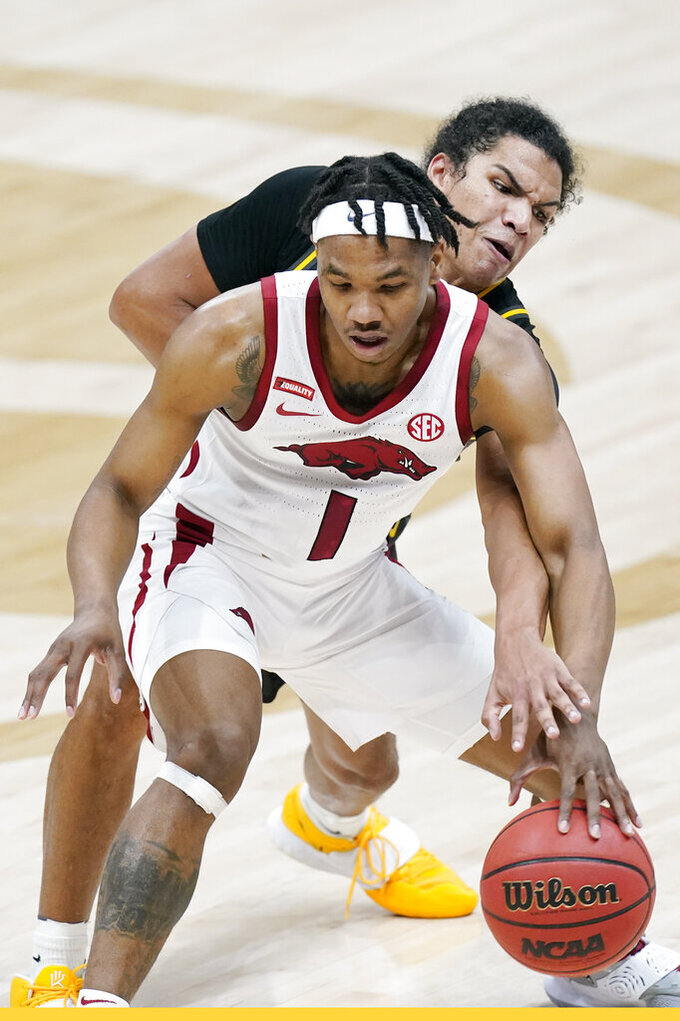 INDIANAPOLIS (AP) — One of the beauties of the NCAA Tournament is that every team has a story.

Some are more unique than others.

Take the first-round matchup between third-seeded Arkansas and No. 14 seed Colgate, which pits two of the fastest teams in the country against each other in a game Friday that could easily approach triple-digits for scoring.

The Razorbacks are led by former NBA and Nevada coach Eric Musselman, whose dry humor and caustic wit makes his news conferences must-see viewing. Musselman has put together a dynamic roster heavily dependent on transfers — eight of the 15 players began their careers elsewhere, including three of their four leading scorers.

There's guard J.D Notae, who spent two years at Jacksonville State. Justin Smith, who spent three just down the road from Indianapolis at Indiana. Jalen Tate spent four years at Norther Kentucky, where he made an NCAA Tournament appearance, and Connor Vanover, who began his season at California.

Vance Jackson had two stops before getting to Fayetteville, spending a season at UConn and two more at New Mexico. Abayomi Iyiola came from Stetson, Emeka Obukwelu from Texas-Tyler and Brandon Kimble from Mississippi Valley State.

On the flip side, Colgate lost only one game this season, regularly tops 100 points and returns several players from the group two years ago that took second-seeded Tennessee to the wire in a first-round loss.

“I think this group that experienced that a couple of years ago, that helps,” Raiders coach Matt Langel said. “I think it's helped us every day since then. The guys have an understanding and a confidence and connectedness that when they play together, they can play with any team there is.”

You'll have to take his word for it. Colgate went 14-1 this season with all 15 games against just five opponents. Five of those games were wins against Boston, four were against Holy Cross and three came against Army.

Indeed, every team in this year's tournament has a story. Here are some of them:

TURN UP THE FLAMES

Liberty also has some NCAA Tournament experience, beating Mississippi State to reach the round of 32 a couple of years ago, and has gone 82-16 over the past three seasons despite having one of the smallest lineups in college hoops.

The only regular that stands taller than 6-foot-7 is Blake Anderson, and he doesn't break the tape by much. Leading scorer Darius McGee is a 5-9 sparkplug. His backcourt mate, Chris Parker, barley breaks 6 foot.

The Flames' first-round opponent, Oklahoma State, has five players that stand 6-8 or taller. That includes All-American forward Cade Cunningham, who at 6-8 often plays the point and is responsible for getting his offense going.

Only rarely does a four-star prospect find his way to a smaller school like Winthrop, and even more rare when he's a 6-9, 275-pound dunking machine. But that's exactly what the Eagles have in Tennessee transfer D.J. Burns, who returned home to Rock Hill, South Carolina, after spending his freshman season with the Vols.

Burns is a big reason — physically and production-wise — Winthrop lost a single game by two points all season, and why coach Pat Kelsey's team full of Palmetto State standouts has a live shot at upsetting No. 5 seed Villanova on Friday.

PLAYER(S) OF THE YEAR

Eastern Washington guard Jacob Davison was the Big Sky preseason player of the year, yet he doesn't even start for the Eagles. His teammate, Tanner Groves, wound up being league MVP — yet wasn't even an all-Big Sky pick before the season.

No wonder Kansas coach Bill Self was aghast upon seeing who his third-seeded Jayhawks played on Saturday.

“We didn't get any favors on this deal,” he said. “They have five averaging in double figures and a sixth averaging 8.5 points a game. They can score. They can shoot. They can stretch it. They're a tough team to guard.”

Mount St. Mary's will likely be long gone by next week. Such is life as a No. 16 seed. But there's a good chance Damian Chong Qui will make at least a few people remember him before the Mountaineers are sent packing.

Nevermind his personal story — his mother was murdered, his father paralyzed — but Chong Qui has a knack for making big plays at big moments. He scored the final seven points to beat Central Connecticut State, then did the same thing against Long Island. He hit the shot that forced overtime against Fairleigh Dickinson, then did the same thing against St. Francis. In the Northeast Conference final, he scored 17 of 21 points after halftime to book an NCAA trip.

The Mountaineers face Texas Southern in a First Four game on Thursday night.