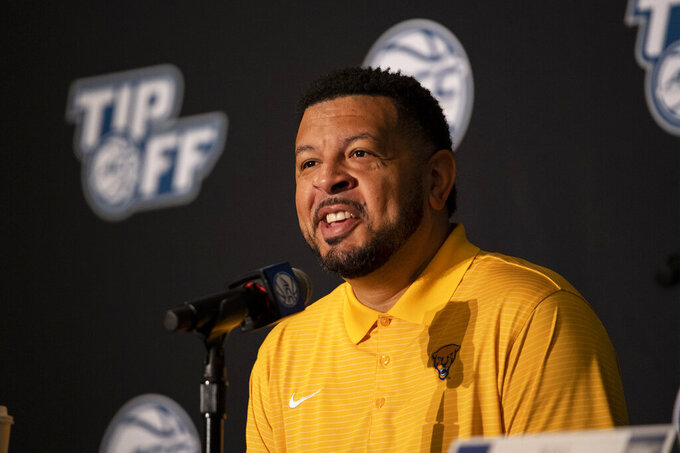 PITTSBURGH (AP) — Jeff Capel is entering his fourth season at Pittsburgh. It still sort of feels like the first.

The Panthers have yet to post a winning record under Capel let alone reach the NCAA Tournament. They have shown a penchant for second-half fades, including a 2-10 slide last winter following an upset win over Duke that appeared to offer proof Pitt might finally have arrived.

Throw in an abnormal amount of roster churn — the Panthers have seen high-profile contributors Trey McGowens, Au'Diese Toney and Xavier Johnson transfer out over the last 18 months — and Pitt appears to be running in place.

Still, Capel believes he's closer to finding the right formula to return the Panthers to respectability in the ACC, a formula that starts with finding players who embody the aggressive mentality that served as the program's hallmark during its days as a Big East power in the early 2000s.

“During that time, you had guys that had a chip on their shoulder,” Capel said. “They were unbelievably together, they were tough. And they felt like they had something to prove and they played like it every day. And that’s what we have to do. We have to play like it every day.”

Something Pitt hasn't done nearly enough during his three-year tenure. The Panthers are 40-46 under Capel, including a 10-12 mark during the COVID-19 pandemic shortened 2020-21 season.

Now they'll have to find a way forward without Johnson and Toney. Both were part of Capel's initial recruiting class and flourished into two of the league's better players. It wasn't enough for them to stick around. Toney is now at Arkansas while Johnson left for Indiana.

Capel hinted part of the issue with Toney and Johnson was a lack of buy-in on what he is attempting to build.

If Capel is being honest, he knows he's behind schedule in the rebuilding process he began nearly four years ago. He needed just two seasons in his first two head coaching stops at Virginia Commonwealth and Oklahoma to reach the NCAA Tournament.

It would be a massive surprise if the Panthers get there in Year 4. Pitt was picked to finish next-to-last in the ACC.

“We’ve had opportunities to (flip things), but we haven’t been worthy of doing it because we haven’t been together,” he said. “And so that part is frustrating. But I know we’re headed in the right direction.”

The Panthers must find a way to replace the production of Toney, Johnson and forward Justin Champagnie, who is now in the NBA. The trio combined for 46.6 points, 20.4 rebounds and 9.6 assists last season and almost always had the ball in crucial situations.

That job will now fall to the likes of guard Nike Sibande. The transfer from Miami (Ohio) was limited by injury and averaged just 6.9 points per game. That number will likely go up, way up, for a team in desperate need of offense.

Sophomore guard Ithiel Horton figures to take over the majority of the ballhandling duties with Johnson gone. Horton showed flashes last season, scoring in double figures in five of Pitt's last nine games. The transfer from Delaware knows he needs to be more consistent.

“I feel like my impact was -- it wasn’t as I thought it was going to be,” Horton said. “Obviously I had a lot of growing to do. But I mean, it was a blessing being able just to be back on court and playing again, and I’m looking to take a bunch of steps forward this year.”

The Panthers open the season at home against The Citadel on Nov. 9. Their non-conference slate includes a trip to West Virginia to face their longtime rivals on Nov. 12, a visit to Madison Square Garden to take on St. John's as well as home games against Minnesota and Vanderbilt.

Pitt opens ACC play against preseason No. 25 Virginia on Dec. 3.