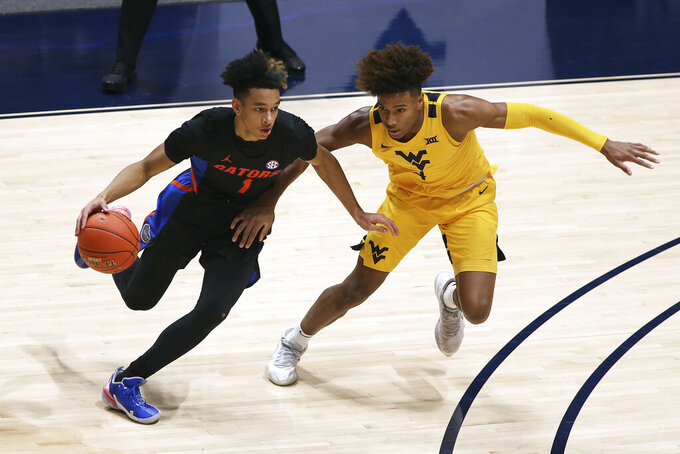 But after standout forward Keyontae Johnson collapsed on the court in early December and was hospitalized for 10 nights, White and his staff literally went back to the drawing board. They scrapped everything.

They flushed the dribble-drive offense that was designed to take advantage of Johnson’s slashing strengths, the scheme the Gators had honed throughout summer workouts, training camp and the first few weeks of the season. They installed a heavy dose of ball-screen action, with big men picking and rolling to the basket early and often.

It was a bold move that came after an honest assessment of White’s roster, a self-scout that showed Florida had no one to aptly fill Johnson’s role.

It now looks like the best decision of White’s six-year tenure in Gainesville, one that should garner him consideration for the Southeastern Conference’s Coach of the Year award. The Gators (10-4, 6-3 SEC) have learned to play — and win — without their best player and within a completely revamped system.

“We’re scoring a little better on the interior, better than we have in a long time here,” White said. “It’s opened some things up.”

White is being modest. Florida has won four in a row, including a 26-point victory at home against No. 6 Tennessee and a five-point win at No. 11 West Virginia. The streak got the Gators ranked Monday for the first time in more than 14 months.

They entered the Associated Press men's college basketball poll at No. 22, their first Top 25 ranking since Nov. 25, 2019. Getting back has been a tough road, no pothole more daunting than seeing Johnson slam face-first onto the floor at Florida State on Dec. 12 and then spending the next two weeks wondering about his health and future.

“It’s been very difficult,” White said. “I don’t want to sit here and moan about it, though. We’re all going through stuff. Ours is particularly unique with the trauma that these guys faced with Keyontae, of course. A lot of people are having to make adjustments, and we are making significant adjustments.

“It’s easy to say, ‘Well, let’s just play this way to win.’ You don’t really have time. We’re not given another preseason. So, again, we came back from Christmas and you’re balancing changing what you’re doing, your offensive and defensive philosophies, while you’re balancing the next scouting report. … It’s just been one game after another, so, yeah, very challenging for obvious reasons.”

Florida hosts South Carolina (4-6, 2-4) on Wednesday before playing three of its next four on the road, a daunting stretch that includes trips to LSU, Tennessee and Arkansas.

No one would be surprised to see the new-look Gators win any or all of them. They are averaging 82.5 points during their modest winning streak, getting consistent contributions from Michigan transfer Colin Castleton and fellow forward Omar Payne.

White’s retooled lineup has the big men often on the court at the same time, a change that’s working as well as putting speedy point guards Tre Mann and Tyree Appleby in the starting lineup together.

“If you combine our wingspans, it’s crazy,” Castleton said.

The Gators entered the season wanting to play faster than they ever have under White. The plan was to push and press, hoping to get more easy baskets in transition. Tempo remains a huge part of what Florida is doing, with Mann and Appleby running the show.

White wants his team getting up a shot in the first eight seconds of the possession. If not, then the Gators settle into their offense and pound the ball down low to Castleton and Payne. That inside-out play has resulted in more open looks for sharp-shooter Noah Locke as well as fellow guard Scottie Lewis.

“Everybody's focus has been, like, amazing,” Appleby said. "Coach came into practice, told us that we had to revamp some things. Just being locked in and focused and everything, I think that’s what helped everybody just stay on the right track and learn what we had to do to be better.”