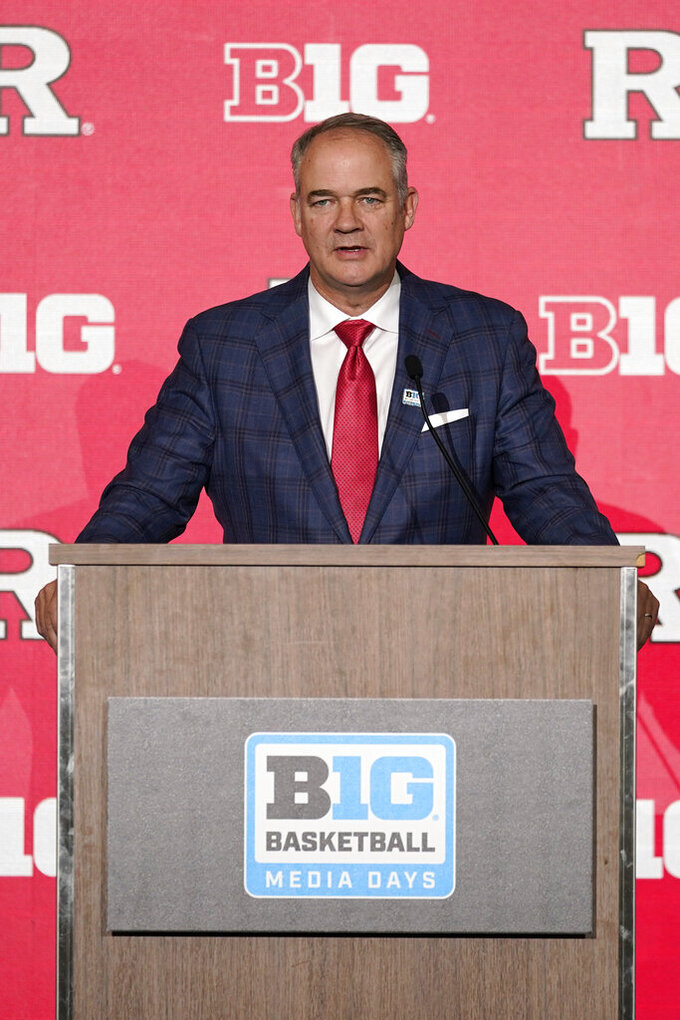 PISCATAWAY, N.J. (AP) — Rutgers is no longer wondering whether this will be the year it gets back to the NCAA Tournament.

After 30 years of wondering, the Scarlet Knights ended that skid in 2021. Coach Steve Pikiell and his players followed that up with another bid last season and now seek their third straight.

Pikiell still has a team capable of making it to March Madness but he will have to do it without his two most reliable players. Swingman Ron Harper Jr. and point guard Geo Baker have no more eligibility.

There are three players Pikiell is going to have to rely on to provide the leadership: center Cliff Omoryori, guard Paul Mulcahy and forward Caleb McConnell, a defensive specialist.

Pikiell said his team has a good blend of veterans and rookies, along with transfer shooting guard Cam Spencer.

“I’m excited about returning 64% of our minutes from last year,” Pikiell said. “I really believe that we have a chance to be really, really good in what is the best league in the country, and even going to get better moving forward.”

Mulcahy, a senior who takes over as the point guard, said this is as excited as he has been entering a season.

“I don’t only want to win this season. I want to really win in the NCAA Tournament,” said Mulcahy, who averaged 5.3 assists last season, second in the Big Ten Conference.

When the game has been on the line in recent years, Harper (15.8 points per game) or Baker (12.6) would have the ball in their hands in the closing moments. They were playmakers who could create their own shots.

Who does that this season remains to be seen.

“I really worked on my outside game this offseason and being able to expand the floor with my midrange game,” said Omoruyi, who averaged 11.8 points last season.

Mulcahy (9.0) scored in double figures in seven straight games during a span when Rutgers posted wins Michigan State, Ohio State, Wisconsin, and Illinois. All four teams were ranked at the time.

The other option would be for Pikiell to run more set plays to get players open. That might fit the makeup of this team.

Omoruyi made a big jump between his freshman and sophomore seasons, averaging 11.9 points and 7.9 rebounds last season. The 7-foot center shot 62.4% from the field and started all 32 games. He averaged 3.8 points and 4.0 rebounds as a freshman.

Omoruyi, who was a preseason conference selection, was second in the nation in dunks (93) last season. The athletic Nigerian could increase his value by working more on his defense. The NBA is likely in his future.

In getting Spencer to transfer from Loyola Maryland, Pikiell added the Patriot League’s leading scorer and possibly a solid shooter who can knock down 3-pointers on a consistent basis.

Spencer averaged 18.9 points along with 2.3 steals. If there is a concern about the 6-4 guard, it's whether he can take the step up and play in a Power Five league where the players are better and the defenders are quicker and longer. He also will have to show he can create his own shots.

If he can, that will prevent teams from sagging down to guard Omoruyi inside.

The Scarlet Knights return the conference's 2021-22 defensive player of the year in McConnell, who had a league-high 70 steals. He also picked up his scoring last season, averaging 7.1 points

“For me, on the defensive side of the ball there is no ceiling,” McConnell said. “If I put my mind to something, I feel like I can do it. This year I have nothing to prove. I feel like if I just go out there and play my game, I can achieve those things I want to achieve this year.”

Entering his seventh season at Rutgers, Pikiell believes this team could be one of his best defensive units.

Jersey Mike's Arena, formerly known as the RAC, is a tough place to visit for opposing teams.