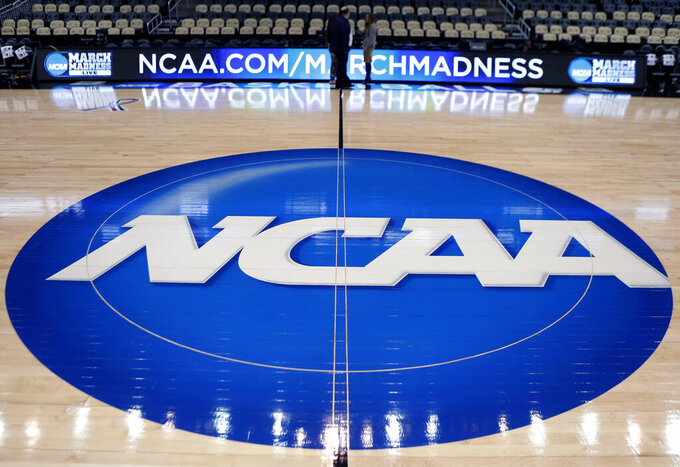 FILE - In this March 18, 2015, file photo, the NCAA logo is displayed at center court as work continues at The Consol Energy Center in Pittsburgh, for the NCAA college basketball tournament. The NCAA has fallen short of upholding its commitment to gender equity spending more on male athletes on average than female ones according a second review. A law firm hired by the NCAA to investigate equity issues released a 153-page report Tuesday night, Oct. 26, 2021 that includes a series of recommendations to improve the gap. (AP Photo/Keith Srakocic, File)

The NCAA spends more on average on male athletes than female ones, particularly when it comes to the “mere handful of championships” viewed as revenue sources, according to a new report.

The law firm hired by the NCAA to investigate equity issues released its 153-page report Tuesday night, which includes a series of recommendations to improve the gap among all sports tournaments. It's the second report from the firm, following its Aug. 3 one that recommended how to equalize men's and women's basketball tournaments.

The NCAA has implemented some of those, including allowing the women's tournament to use the term “March Madness."

“The same structural and cultural issues that impact Division I basketball pervade the NCAA and have shaped its treatment of other championships,” the report said. “The NCAA membership’s heavy reliance on the money it receives from NCAA revenue distributions has placed pressure on the NCAA to maximize that revenue and minimize spending so that more funds can be distributed to the membership."

Tuesday's report shows spending per Division I and national championship participants, excluding basketball, was about $1,700 less for women’s participants than men’s in 2018-19. The NCAA spent $4,285 per men's participant versus $2,588 per women's participant.

The gap is even greater in the six single-gender sports like wrestling and beach volleyball — $2,229 more per student-athlete for the men’s championships than for the women’s.

The review also found that sports with combined their championships have fared better on gender equality.

“We have seen that combining at least some portion of the men's and women's championship for a given sport enables more coordinated planning, increases equity in the goods and services, facilities, and resources provided at the championships and eliminates or reduces disparities between the ‘look and feel’ of the tournaments," the report said.

Another piece of the report shows NCAA doesn’t have the infrastructure in place to encourage equal sponsorships at all championships.

“The report identified important recommendations, which we will prioritize and sequence so they can be implemented for impactful change,” the NCAA Board of Governors said in a statement on the institution's website. “These changes may require altering budgets and business models while evaluating the balance between resources devoted to championships that produce revenue and resources for those that do not.”

The review was done by Kaplan Hecker & Fink LLP, which was hired in March after the NCAA failed to provide similar amenities to the teams in the men’s and women’s Division I basketball tournaments. The situation blew up on social media amid player complaints and prompted apologies from NCAA executives, including President Mark Emmert.

— Establishing a system for collecting and maintaining standardized data across all 90 championships that will facilitate future gender equity reviews and audits.

— Getting rid of gender modifiers on branding for the tournaments and championships.

— Increasing the number of senior staff in the NCAA’s championships structure to improve oversight of gender equity.

— Conducting a “zero-based” budget for each championship over the next five years to ensure gender differences are necessary, appropriate and equitable.

The report estimated that ESPN is underpaying the NCAA for tournament rights for 29 championships, “causing the association to lose out on substantial and crucial revenue.” For example, the firm estimated that women’s basketball annual broadcast rights in 2025 would be worth $81 million to $112 million, which is “multiples more” than the network gives NCAA right now for all 29 championships.

“The structure of broadcast agreements is holding back the growth of sports other than men’s basketball and the leadership team has been unable to recognize the inequities in treatment of student-athletes and rectify it in a timely manner,” Metro Atlantic Athletic Conference commissioner Rich Ensor said.

August's report highlighted staffing as an issue for championships, with men's basketball having more than women's hoops. Some sports like baseball and hockey also had more staffing than softball and women's hockey, the latest review said, though it showed women's volleyball and soccer championships had bigger staffs than the men.

The report says there “appears to be no formal or consistent definition" of the three categories that the NCAA uses to decide staffing for championships -- “equity,” meaning revenue-producing or could be revenue-producing; “growth,” which would have the potential to make money over time; and “sustained,” or one that loses money.

“There remains little understanding among the NCAA membership and even among NCAA staff about how staffing support is allocated among championships,” the report said.

The law firm also said couldn’t do direct comparisons between championships because “the NCAA does not maintain its records of expenses, ticket sales, amenities, or other items in a standardized manner that would permit such analysis."

Fan festivals were another topic in which there was gender inequality, the report said. The women’s soccer fan festival is bigger than the men’s, but is an outlier. Men’s lacrosse and baseball fan festivals have more sponsors, music and games than women’s, the firm said, and the NCAA spends more on them. The 2019 baseball fan festival cost about $274,800, compared to the softball equivalent at $53,900.