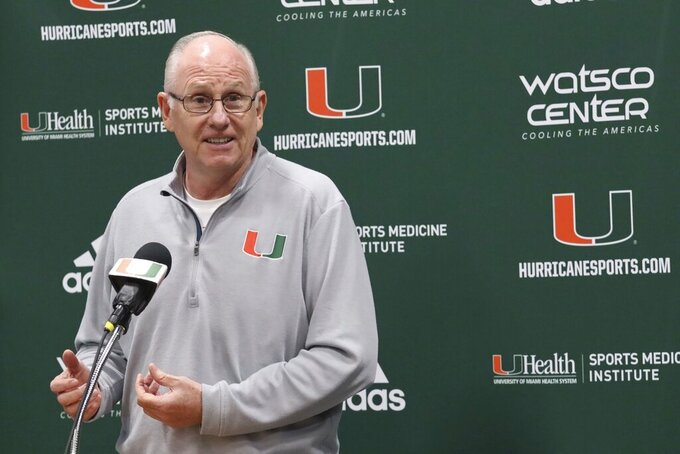 The 6-foot-11 Miller was in such poor shape a year ago that he redshirted as a junior. During the layoff, he cut his weight from 280 to 238, and now the Hurricanes' only healthy center is looking fit as they try to bounce back from a disappointing 2018-19 season.

"If Rodney can play at the level he's capable of getting to consistently, he may be the most improved player in the ACC," Larranaga says.

Improvement sounds good to the Hurricanes, who return only two starters from a team that went 14-18 a year ago. It was Larranaga's first losing season since 1997-98, when he was at George Mason, and the Hurricanes' 5-13 record in the Atlantic Coast Conference was their worst since 2010.

Miller has always showed a good touch around the basket, but he had trouble staying on the court.

"He would get tired very quickly," Larranaga says. "We scrimmaged the other day for 30 minutes, and Rodney played all 30. That never would have been possible his first couple of years."

Miller says he lost weight by eating three times a day, instead of skipping breakfast and lunch and having one big meal. He also cut back on goodies baked by Larranaga's wife.

The payoff came slowly, but a smaller Miller noticed a big difference when practice began.

"I was getting more and more excited every day," he says. "I couldn't wait to get to practice and try out my new body. All my moves got sharper. I jumped higher. I felt like a new person."

The Hurricanes need him. Their only other big man this season will be 6-10 sophomore Deng Gak, who is still rehabbing from a knee injury last December.

Dynamic 5-foot-7 Chris Lykes led the Hurricanes in scoring as a sophomore a year ago, and this season he hopes to become known for more than flashy moves.

Three freshmen are likely to have a role this season — 6-4 Harlond Beverly, 6-3 Isaiah Wong and 6-8 Anthony Walker. The Hurricanes also have added 6-5 Kameron McGusty, who sat out last season after transferring from Oklahoma, where he averaged 9.4 points in two seasons.

Keith Stone, a 6-8 graduate transfer from Florida, is still recovering from an ACL injury in January, and there's no timetable yet regarding his return.

Last year the Hurricanes allowed opponents to shoot 45% and score 71 points per game, the worst averages in Larranaga's eight years at Miami.

He traces the decline to star guard Bruce Brown's season-ending injury in January 2018.

"We're not a great defensive team," Larranaga says. "It has been an area of concern actually since we lost Bruce the middle of his sophomore year. We dropped statistically from being one of the better defensive teams in the ACC to one of the worst, and we haven't been able to get back."

The ACC has expanded its league schedule from 18 games to 20, and for the first time, the Hurricanes open their season with a conference game. They play host to No. 5 Louisville on Nov. 5.

"We've got to be prepared," Lykes says. "If we're not, it's not going to be good for us. It's good to have something like that opening up. It shows we can't mess around in these practices."