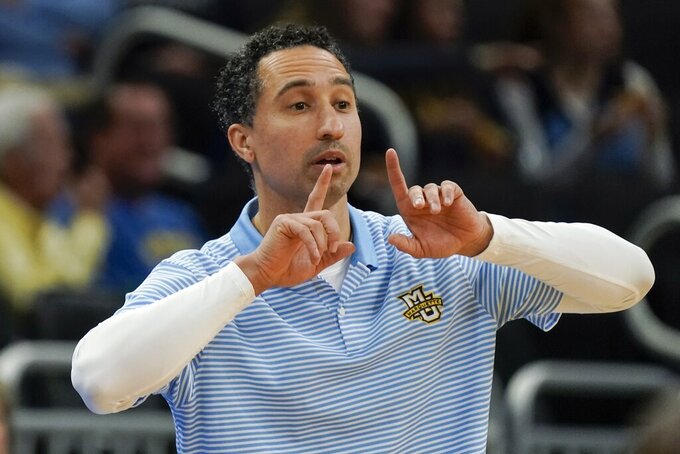 MILWAUKEE (AP) — Shaka Smart’s ability to get the most from an overhauled roster in his debut season at Marquette could depend on how well his players understand an entirely different game.

Smart constantly preaches the importance of having a positive impact. The idea is that if a player does the right things, his attitude will have a domino effect carrying over to each of his teammates.

Smart was one of the nation’s hottest coaches after reaching the Final Four with VCU in 2011 and sending the Rams back to the NCAA Tournament each of the next four seasons. He left for Texas in 2015, but never got the Longhorns beyond the NCAA Tournament’s round of 64.

Now Smart, a native of Madison, Wisconsin, is back in his home state, eager to help Marquette return to Big East contention.

Marquette is trying to regain the momentum it established while making eight straight NCAA Tournament appearances from 2006-13, including one regional final and two other Sweet 16 berths.

Smart knew enough about Marquette’s program to understand what’s worked here in the past.

“One thing that’s certainly been true here on the better teams is a level of blue-collar mentality, a toughness, a group of guys that just wasn’t going to back down from any challenge,” Smart said. “So that’s certainly what we’re trying to build.”

Marquette will have a different look from the squad that went 13-14 last year under Steve Wojciechowski, who was fired after going 128-95 with no NCAA Tournament victories in seven seasons.

Justin Lewis (7.8 points per game last season), Greg Elliott (6.2) and Oso Ighodaro (1.2) are the only players back who lettered last season. Elliot will serve a four-game suspension to start the season, including Tuesday's opener against Southern Illinois-Edwardsville.

Smart restocked his roster by bringing in four transfers and five freshmen. Three of the freshmen signed to play for him at Texas and then followed him to Marquette. Two others signed with Marquette before Wojciechowski was fired.

The most notable transfer is former Maryland guard Darryl Morsell, the Big Ten’s defensive player of the year last season.

Morsell said he had just entered the transfer portal when he got a call from Smart. Morsell then reached out to Matt Coleman, a friend who had played for Smart at Texas.

“He told me this guy will tell you the truth, (that) he ain’t going to lie to you, but he’s going to be hard on you,” Morsell recalled.

Smart’s challenge is to get all these players working together. That’s no small task, but amid all the new faces players say Smart is helping to make them one cohesive unit.

“He knew the foundation he wanted for this program,” said Morsell, who is practicing again after recovering from a torn labrum in his right shoulder. “Regardless of if you were new, if you were recruited by a different staff, he kind of cleared the way and figured out who was about winning. We’re all a bunch of guys who want to win, at the end of the day.”

Smart likes the way his players have taken to his message so far. Of course, the real test comes once the games start.

“I think our guys have responded really well, but we haven’t had a lot of adversity,” Smart said. “The next step is being able to respond well when there’s adversity.”

That adversity could come in a hurry.

Marquette’s schedule includes early tests against No. 11 Illinois and No. 2 UCLA. A preseason poll of the Big East’s coaches had Marquette finishing ninth out of 11 teams.

“For us, in our first year, I’m not really caught up in necessarily worrying abut what other people’s expectations are at all,” Smart said. “It’s about laying the foundation for who we want to be. Because we believe who we want to be will lead to success.”