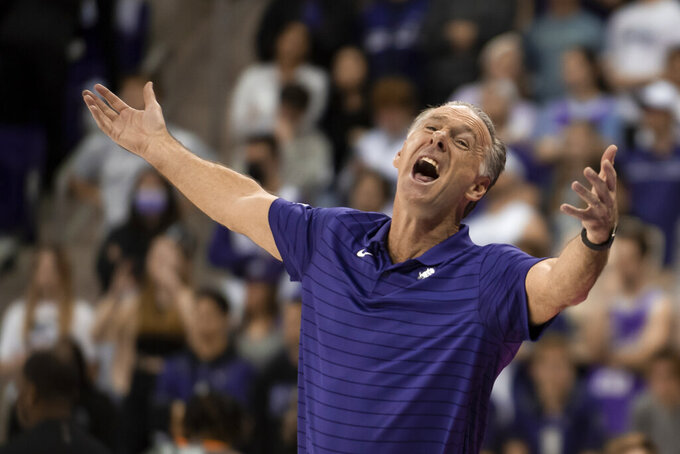 TCU head coach Jamie Dixon reacts to a foul call in the first half of an NCAA college basketball game against Oklahoma State in Fort Worth, Texas, Tuesday, Feb. 8, 2022. (AP Photo/Emil Lippe)

TCU led by 13 points, 69-56, with seven minutes left but only made two field goals the rest of the way as Oklahoma State battled back during an 11-0 run — with seven points from Isaac Likekele. Damion Baugh ended TCU's drought with a runner from the free-throw line with 1:44 left for a 72-69 lead.

Lampkin grabbed an Oklahoma State missed free throw with 20 seconds left and was fouled before making two free throws for a 75-71 lead. Avery Anderson III answered for Oklahoma State with a quick layup, but Baugh sealed it with a full-court pass to Emanuel Miller for a dunk and a four-point lead. Miller also blocked a shot on Oklahoma State's final possession.

TCU plays at No. 9 Texas Tech on Saturday in the first of six Top-25 matchups over its final nine games. Oklahoma State hosts West Virginia on Saturday.