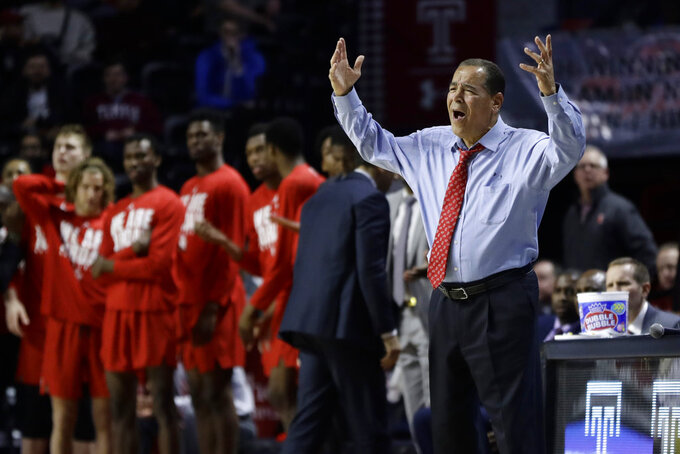 Houston head coach Kelvin Sampson reacts to a call during the second half of an NCAA college basketball game against Temple, Wednesday, Jan. 9, 2019, in Philadelphia. Temple won 73-69. (AP Photo/Matt Slocum) 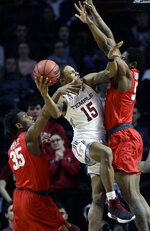 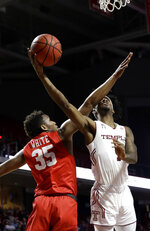 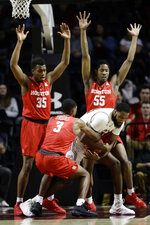 They were thrilled to see him do it with a big game on the line.

Quinton Rose scored 22 points, Aflakpui made the decisive defensive play and the Owls handed No. 17 Houston its first loss of the season, 73-69 on Wednesday night.

Corey Davis Jr. was called for a charge in the final second of play after Aflakpui stepped in front of him, wiping out a tying basket for the Cougars (15-1, 2-1 American Athletic Conference). That left No. 2 Michigan and No. 4 Virginia as the only Division I teams without a loss.

"In practices it's frustrating because he's always taking charges on us," Rose said. "But in a game, he saved us. I love him."

"I think the jury's still out what kind of team we are," Houston coach Kelvin Sampson said. "I'm anxious to see how we handle this. It'll help us the next time we lose a game."

Shizz Alston Jr. had 12 points, six rebounds and six assists for the Owls (12-3, 2-1), who have won five of six. Nate Pierre-Louis added 16 points to help Temple beat a Top 25 team for the 12th straight season.

Armoni Brooks, Houston's second-leading scorer, was held to five points on 2-for-12 shooting.

"We were going to lose one eventually," Sampson said. "There's never a good loss, but losing at Temple is not the end of the season for us."

After J.P. Moorman II hit a 3-pointer to put Temple up nine with 7:28 remaining, the Owls went without a field goal for more than six minutes as Houston trimmed the lead to 67-66 behind eight straight points from Brady. A pair of free throws from Pierre-Louis followed by a turnover and Rose's slam put the Owls up 71-66 and got the Liacouras Center crowd on its feet.

Davis answered with a 3 with 37.3 seconds left. But after a Temple shot clock violation, Aflkapui took the charge to help the Owls hang on.

Officials conferred and upheld the call before Temple sealed the victory with two free throws — and a small group of students not home for winter break rushed the court in celebration.

Houston: The Cougars were coming off seven straight games at home, where they are carrying a nation-best 28-game winning streak. This visit marked just their third road game of the season, with previous wins coming against BYU and Oklahoma State.

Temple: Seeking an NCAA Tournament berth, the Owls are off to their best start since the 2010-11 season. They look like AAC title contenders early on, narrowly losing to preseason favorite UCF on the road and handing Wichita State a rare home loss to begin the conference slate.

While Alston, the conference's leading scorer, shot just 3 for 15 from the field, Dunphy was thrilled to see Rose carry most of the offensive load.

"He was probably as poised as he's been and as confident as he's been," the Temple coach said. "Hopefully he's growing and maturing."

Rose and Pierre-Louis both shot 9 for 10 from the foul line. Temple made 25 of its 28 free throw attempts.

KEEP YOUR TIE ON, SIR

In addition to being upset that the game-deciding play was called a charge and not a block, Sampson also wasn't too happy he was whistled for a technical foul midway through the second half.

The reason he was given? He took off his tie.

"I've been taking off my tie for a lot of years," the Houston coach said. "When I take it off, I usually throw it down. . First time I ever got a technical for it."