Transfers lead No. 4 UVa to rout of Towson in Bubbleville 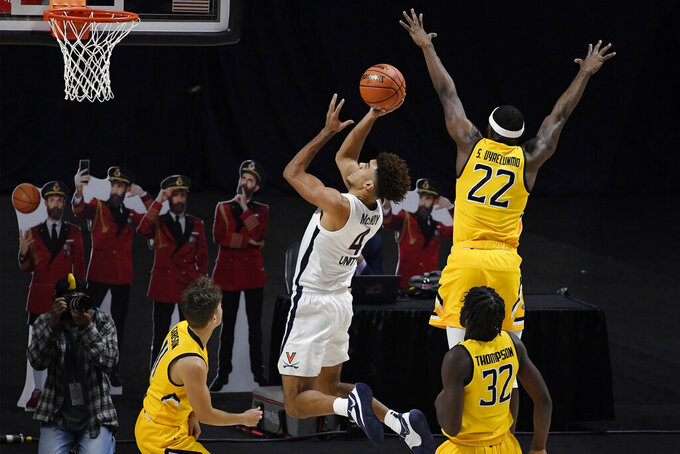 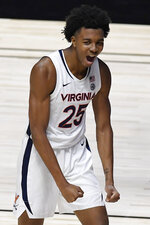 UNCASVILLE, Conn. (AP) — Virginia coach Tony Bennett already had a roster that was expected to compete for a national title this season, even without sharpshooter Trey Murphy III, who was expected to sit out a year after transferring from Rice.

But Murphy persuaded his coach to apply for a waiver from the NCAA and on Tuesday, the team learned it had been granted.

The fourth-ranked Cavaliers' newest weapon scored 21 points in his debut Wednesday, a season-opening 89-54 rout of Towson.

“We're so glad that he gets to play," Bennett said. “You saw his strengths. He's looked good in practice. He continues to adjust and understand.”

Fellow transfer Sam Hauser added 19 points and Jay Huff added 14 points for the Cavaliers, who never trailed and led by 23 points at halftime.

Nicolas Timberlake scored 19 points for Towson, which was a late replacement after Maine withdrew from the game Tuesday. Maine paused all winter sports because of COVID-19 cases at the school and in its athletic department.

The game was the first in an 11-day event dubbed “Bubbleville,” which includes several tournaments and individual games being played inside the Mohegan Sun resort casino in Connecticut.

Each program is given its own floor in the resort's hotel tower and the teams are using back-of-house passageways to avoid the gaming floor and other guests.

Huff opened the game with a 3-pointer from left of the key and the Cavaliers ran out to an early 12-3 lead.

Murphy's first points, one of his six 3-pointers, gave Virginia its first 20-point lead at 33-13. A 3-pointer from Hauser at at the halftime buzzer sent the Cavaliers into the break up 42-19.

Towson scored the first eight points after intermission, helped by a pair of 3-pointers from Timberlake.

But the Tigers had no answer for Hauser, Murphy or the 7-foot-1 Huff, who had four baskets in the first five minutes.

Murphy and Hauser combined to go 14 of 18 from the field.

Murphy's driving dunk and subsequent free throw midway through the second half gave the Cavaliers a 32-point lead at 68-36. That was part of a 22-2 second-half run.

“I think it was kind of a relief knowing that we can do that type of thing,” said Hauser, who played three seasons at Marquette.

“Everybody likes to shoot the 3,” Bennett said. "But as long as the ball moves and it’s a good timed shot, we’ll take it.”

Timberlake was the lone bright spot for Towson, which lost its top three scorers from last season. The sophomore went 6 of 12 from the field, including five 3-pointers.

“We were thrown into the water with the sharks right away,” coach Pat Skerry said. “We'll learn from it.”

There were a number socially distanced gamblers inside the Mohegan Sun casino but no fans inside the 10,000-seat arena. The bottom tier of seats had been pushed back and black drapes hung from the concourse. The arena pumped in crowd noise and music and the public address announcer called the game as if there was a full house.

Virginia learned after practice on Tuesday that Murphy's waiver had been granted. Bennett said the 6-9 guard adds strength and defense in addition to his shooting. He told Murphy the good news outside the locker room.

“When he told me, I just started smiling from ear-to-ear,” Murphy said. “You couldn’t really see it, because I had my mask on.”

Virginia did nothing to dissuade those watching that it deserves a top-5 ranking, though it isn't expected to get a real test before a planned Dec. 9 matchup with Michigan State, a week before Atlantic Coast Conference play begins.

Towson has another Bubbleville game Thursday, taking on San Francisco.