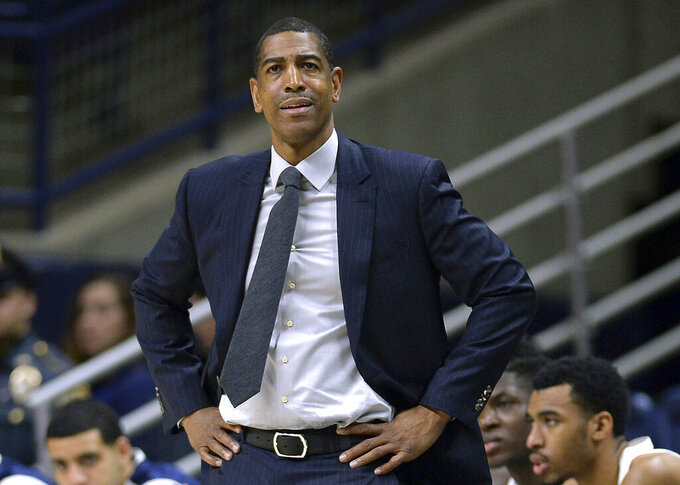 STORRS, Conn. (AP) — The University of Connecticut said Tuesday it has complied with a recent arbitration ruling and has paid former men's basketball coach Kevin Ollie more than $11.1 million.

Arbitrator Mark Irvings ruled last month that Ollie had been fired improperly under the school's agreement with the American Association of University Professors, of which Ollie was a member. He noted the school had past NCAA violations in the men's and women's programs without going as far as firing the coaches.

The school was ordered to pay Ollie $11,157,032.95. The payment represents what Ollie would have been due under the remainder of his contract had the school not chosen to fire him in March 2018, citing numerous NCAA violations in his program.

“The university has serious concerns about how this ruling impacts UConn’s proactive efforts to run a program with integrity and in full NCAA compliance,” UConn said in a statement. "This is precisely why all of our coaches have employment contracts detailing their compliance obligations. The arbitrator’s reliance on the collective bargaining agreement in this case, rather than the contract, undercuts that effort."

UConn said that while it continues to disagree with the ruling, it believes it is in the school’s best interest to move on and take no further legal action.

In 2019, the NCAA placed UConn on probation for two years and Ollie was sanctioned individually for violations, which the NCAA found occurred between 2013 and 2018. Ollie's attorneys, Jacques Parenteau and William Madsen accused UConn of making false claims to the NCAA for the purpose of firing Ollie “with cause.”

They called the ruling a “complete vindication” of the coach, a former UConn point guard who guided the Huskies to a 127-79 record and the 2014 national championship in six seasons.

“The University of Connecticut is putting the best spin on a case where the university’s highest officials were found to have engaged in what can only be described as illegal and unethical conduct by making false claims, without evidence, that Kevin Ollie was not a truthful person," they said.