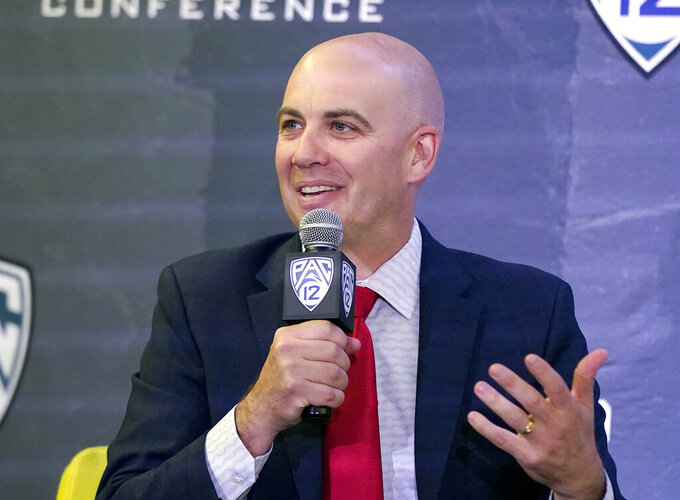 They are also embracing a new basketball philosophy that traces back to the program’s roots as the Runnin' Utes.

Craig Smith, who is entering his first season at Utah after successful stints at Utah State and South Dakota, wants to reintroduce a fast-paced style of basketball to the program. Push the pace, take high percentage shots, and play tough defense.

“It’s a whole new language, whole new system, whole new style of play,” Smith said. “But the beauty of it is we’ve got a lot of guys starting from ground zero and learning it at the same time.”

Smith could be the optimal choice to help the Utes rediscover their winning ways. He led Utah State to a pair of NCAA Tournament appearances in three seasons in Logan and the Aggies averaged 24.6 victories per season during his tenure.

Reaching the NCAA Tournament with Utah seems like a longshot this season. The Utes were picked 10th in the Pac-12 preseason media poll. Still, Utah embraces the notion of winning big right away because past teams under former Utes legends like Andre Miller, Keith Van Horn and Andrew Bogut were March Madness fixtures.

“You see what they did while they were here and you just try to make it as special as it was back then,” guard Marco Anthony said. “And I think we have the guys to do that."

Anthony and fellow guard Rollie Worster enter the season with a built-in advantage over their new teammates.

They were starters for Smith during his final season coaching at Utah State. Anthony and Worster helped lead the Aggies to a second place Mountain West Conference finish during the 2020-21 season. Utah State claimed an at-large bid in the 2021 NCAA Tournament and fell 65-53 in the first round to Texas Tech.

“It’s helped a lot just knowing what he’s bringing in and what he expects from the players,” Anthony said.

Anthony, who also played on Virginia’s 2019 national championship team, averaged 10.0 points, 4.8 rebounds and 3.1 assists for the Aggies last season. Worster averaged 9.1 points, 3.8 rebounds and 3.5 assists per game as a freshman for Utah State a year ago.

Smith expects they’ll be similarly important contributors for Utah from day one.

“They’re ahead of the game in terms of terminology,” Smith said. “They know exactly what to expect from us and what our expectations are on a day-to-day basis.”

Both Gach has returned for a second stint at Utah after spending last season at Minnesota. He entered the transfer portal after an up-and-down season with the Golden Gophers during which he averaged 6.8 points and 1.9 assists while making 16 starts in 29 games.

The senior guard applied for a waiver to play for the Utes this season, but the NCAA has not yet made a decision on his eligibility. Gach originally transferred from Utah following the 2019-20 season after Rylan Jones became entrenched as the team’s starting point guard.

Utah lost its leading scorer from a year ago when forward Timmy Allen transferred to Texas. The Utes may have found a capable replacement for that lost offensive production in senior guard David Jenkins Jr.

Jenkins joined Utah after stints at South Dakota State and UNLV. He emerged as the Rebels’ second-leading scorer last season, averaging 14.8 points per game while shooting 40.9% from 3-point range.

“When David is on the floor, you have to account for him,” Smith said. “You got to know where that guy is at all times."

SCHEDULING ON THE FLY

Utah had only one nonconference game on the books for this season – a home game against BYU – when Smith took over as head coach. He cobbled together a schedule on the fly that features a road game at Missouri and neutral site games against TCU and Boston College. It offers a decent challenge to the Utes, who have road games against USC, Oregon, and Oregon State in their first four Pac-12 contests.