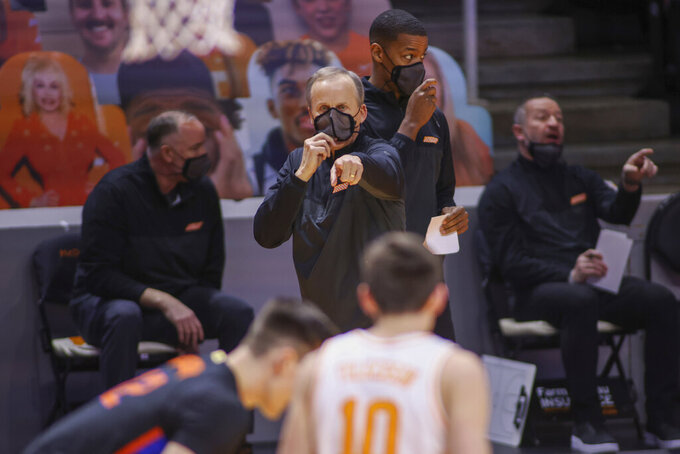 KNOXVILLE, Tenn. (AP) — Victor Bailey Jr., John Fulkerson and Keon Johnson scored 14 points apiece and Tennessee rallied from a 14-point deficit to beat Florida 65-54 on Sunday in the regular-season finale for both teams.

Tennessee (17-7, 10-7 SEC) secured the No. 4 seed and a bye into the Friday's quarterfinals of the conference tournament.

Fulkerson added seven rebounds and four assists and Josiah-Jordan James had eight points and 10 boards for the Volunteers.

Florida used a 13-2 run to take a 31-17 lead with five minutes left in the first half but Tennessee scored 11 of the final 13 first-half points to trim its deficit to five at the break. Florida missed seven consecutive, and 9 of 10, from the field as the Vols ripped off a 21-4 spurt — including eight points by Bailey — to make it 53-43 with 7:33 to play.

The fifth-seeded Gators play the winner between No. 12 seed Texas A&M and No. 13 seed Vanderbilt in Thursday's second round.

After being outrebounded 18-16 in the first half, Tennessee was plus-11 on the glass in the second. Florida had just 21 points after the break, its lowest-scoring half of the season.