Wendell Moore Jr. heats up as No. 7 Duke beats Lafayette 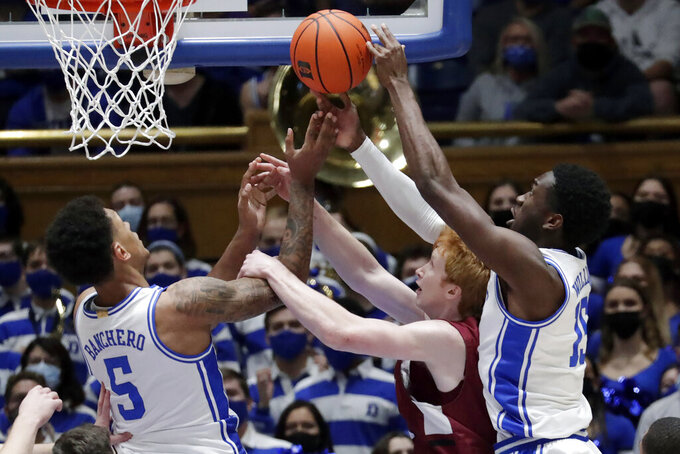 DURHAM, N.C. (AP) — Wendell Moore Jr. scored 23 points and No. 7 Duke used a few smooth stretches in the second half to pull away for an 88-55 victory over Lafayette on Friday night.

Five games into the season, the Blue Devils unleashed another offensive weapon: reserve AJ Griffin. He scored 18 points, becoming the seventh Duke player to score in double figures this season.

“The amount of energy he brought in was amazing,” Moore said.

Griffin posted 14 of his points in the second half, aided by four 3-pointers. The freshman guard who dealt with a preseason knee injury might be rounding into form.

“He has been coming,” coach Mike Krzyzewski said. “Hitting those shots is one thing, but the reaction of our team when he did was terrific.”

Griffin, who had a total of 12 points in the first four games, said he appreciates the support.

“They’re right there with me building me up,” he said.

Kyle Jenkins, who had four of his team’s seven 3-pointers, scored 18 points for Lafayette (0-3).

Moore posted eight consecutive points early in the second half as Duke stretched its lead to 48-34.

“I was just getting out on the floor,” Moore said. “All those were open shots because my teammates were able to find me.”

Lafayette ended up with 17 turnovers, but 12 of those came in the first 15 minutes of the game. Enough defensive stops kept the Leopards in range.

“We didn’t let up, but we couldn’t hit a shot,” Krzyzewski said. “Our offense affected our defense (in the first half), and in the second half it didn’t do that.”

Williams, who blocked four shots, was a nuisance for the Leopards.

“Just the threat that he’s around the basket,” O’Hanlon said. “I think we missed a number of layups that maybe would have kept us in the game.”

Lafayette: The Leopards didn’t handle the pressure well at times, and then they were hindered in the lane with their shots altered by taller Duke players. They had five of their shots blocked after having only 10 shots rejected in their first three games combined.

Duke: The Blue Devils had too many scoring options for Lafayette to contain, particularly with reserves accounting for 30 points. The 53 second-half points are the most for Duke in any half this season.

Krzyzewski is receiving considerable attention as he’s in his final season of a Hall of Fame career. So it was an odd situation for O’Hanlon, who’s usually the more experienced coach than his counterpart.

O’Hanlon is in his 27th season as Lafayette’s coach. He and Krzyzewski are two of five coaches with the same Division I team since the beginning of the 1995-96 season.

At age 73, O’Hanlon was the youngster compared to Krzyzewski, 74.

The only other Lafayette-Duke meeting came in 1977. O’Hanlon embraced this opportunity for the Leopards.

“It’s a big part of my job to give them experiences like this,” O’Hanlon said.

Lafayette: At Rutgers on Monday night.

Duke: Completes a five-game homestand Monday night against The Citadel.