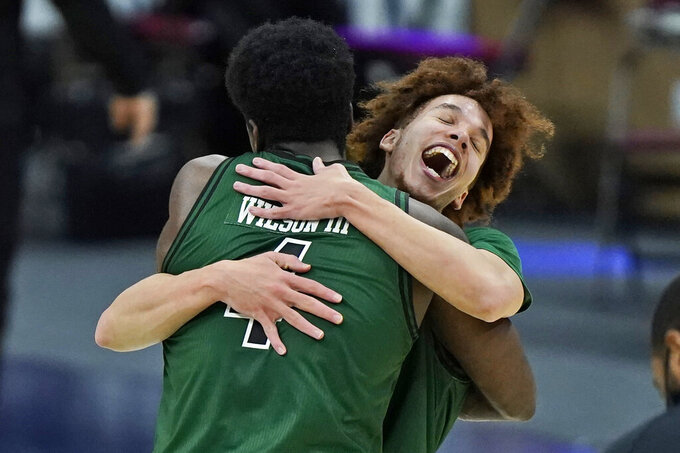 Anybody who follows Mid-American Conference basketball already knows about Ohio star Jason Preston and perhaps heard about his improbable journey to Division I college basketball. With the Bobcats in the NCAA Tournament, the junior point guard and his heart-tugging backstory are now getting national attention.

Preston was electric in the MAC tournament final last weekend, dictating the pace and scoring 22 points as Ohio routed favored Buffalo 84-69 and secured an NCAA Tournament berth for the first time since 2012.

Preston's ascent to the national stage has all the makings of a movie.

The youngster lost his basketball-loving single mother Judith to cancer when he was 15 and he ended up living with a friend. He wasn't on anybody's radar coming out of high school, averaging barely 2 points per game his senior season.

A friend persuaded him to play in an AAU tournament because the team was short one guy. Preston played well enough to stay with it and started to think his basketball dream might still be alive. He enrolled in a sports academy in Tennessee to develop his game and eventually put together his own highlight reel.

Preston got an offer from mid-major Ohio, taking off during his sophomore season in 2019-20 and leading the Bobcats in virtually all offensive categories.

He missed four games due to an injury in a 2020-21 season twice interrupted by coronavirus cancellations. Still, he averaged 16.6 points per game, 7.2 assists and made 40% of his 3-point tries. His gifts were on display the day after Thanksgiving when he scored 31 points and dished eight assists in Ohio's 77-75 loss to Illinois, the eventual Big Ten champs.

“The world needs to know about his story,” second-year Ohio coach Jeff Boals said. “It's a movie. I've been coaching 26 years and I've never seen somebody in his situation, where he was in a five-year span — from 6 feet tall, 140 pounds, scoring 52 points his whole senior year — to where he is today.

“I'm excited for the world to see it, because it's deserving, it's earned, and it's just an American story,” he said.

Preston, now 6-4 and 187 pounds, seems comfortable in the spotlight by now but, perhaps predictably, is quick to deflect it.

“I’ve gotten a lot of attention for what’s happened recently,” he said, “but I just want to say I wish some of my teammates would get some of the same love as well.”

“The division doesn’t matter," he said. "If someone is good, they’re good. If they develop, they develop. Sometimes it’s just aligning in the right situation, at the right time and then having something inside of you.”

NEW TO THE DANCE

There's nothing easy about being sequestered in the tournament's restrictive bubble. But first-year Grand Canyon coach Bryce Drew thinks his team — the first from the Phoenix school to ever make it to the tournament — may benefit from being shielded from the hype and hoopla.

“For a school that's going the first time, there are many distractions, which are good distractions because it's an exciting time," Drew said. “So actually being here in Indy and being in the bubble, it actually allows you to be a little more focused. Because we're not allowed to leave, you can't go out and see family, friends. It really keeps you together."

ALL IN THE FAMILY

Fran McCaffery is perfectly content coaching at Iowa, and having two sons on the roster certainly doesn’t hurt.

McCaffery, who signed a four-year contract extension during last week’s Big Ten Tournament, has a team that includes sons Connor, a junior starter, and Patrick, a freshman reserve.

“They grew up coming to practice, hanging around the players, being in the locker room,” the 11th-year Iowa coach said. “And now they’re in the locker room. Very emotional for me when our name came up (for the NCAA Tournament). It’s just us. We typically have had more people watching that. But it’s just the players and coaches. Having Connor and Patrick in there with their buddies — they're brothers, they’re best friends — it was just a tremendous feeling.”