Buddy Boeheim passes dad on Syracuse list in rout of BC 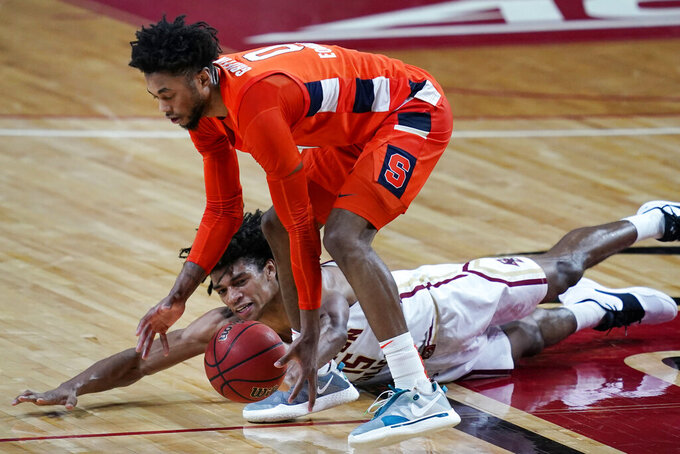 Alan Griffin drained six 3-pointers and scored 22 points to go with 10 rebounds, Bubby Boeheim passed his dad and coach on Syracuse's career scoring list and the Orange routed Boston College 101-63 in an ACC opener on Saturday.

Griffin went 6 of 9 behind the arc and had five assists. Boeheim, a junior, finished with 17 points, pushing him past Jim Boeheim's 745 from his career that finished in 1966. Jim Boeheim is in his 45th year as the Syracuse coach.

Joseph Girard III matched Griffin's five 3-pointers and also had 17 points for the Orange (4-1), who went 16 of 31 behind the arc.

The second half became more of a layup drill as the Orange shot 62% and BC 32%. Syracuse had 11- and nine-point runs and the lead reached 48 before the Eagles scored 10 straight in the closing minutes.

The margin of victory was the largest in the serious since the Orange won 96-55 in March of 1999. It was the first time a team hit the century mark in the series since Syracuse in 1992. The last time Syracuse scored 100 in a conference game was in 2011.